A Controversial Documentary Questioning the Sustainability of Perpetual Economic Growth and Population Growth is Turning Heads by Virtue of the Way It's Being Made. Filmmaker Dave Gardner's Upcoming Film, Growthbusters: Hooked On Growth, is Relying on a Team of Highly-Motivated Volunteers Around the World to Help Produce the Film. 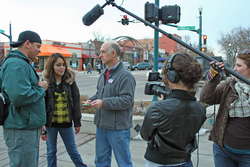 GrowthBusters questions one of our most basic beliefs: that growth brings prosperity and well-being. It takes a real visionary to write a check for this project.

A groundbreaking documentary about the end of growth promises to shake things up when released next year. But it’s already turning heads by virtue of the way it’s being made.

A few recent films, such as Age of Stupid, have been “crowd-funded,” in which the general public pitches in to finance films they want to see made. “Crowd-distribution” of independent films has also come into vogue. Robert Greenwald’s Wal-Mart: The High Cost of Low Price, was seen by 500,000 people in one week by way of 7,000 house parties and community screenings.

Filmmaker Dave Gardner is adding “crowd-produced” to the lexicon. His upcoming documentary, GrowthBusters: Hooked on Growth, is relying on a team of highly-motivated volunteers to actually produce the film and offset much of the film’s $500,000 budget. So far, footage has been contributed by filmmakers in Ethiopia, India, the U.S. and Great Britain. The film’s voluntary co-producer, Donnie Maclurcan, resides in Sydney, Australia. Edmonton, Canada’s Alexandra Billings serves as the film’s voluntary project manager. Everywhere Gardner shoots, volunteers serve as members of the film crew.

Gardner has converted the basement of his Colorado home into offices and an editing suite, and a spare bedroom houses visiting volunteers who spend anywhere from a few weeks to a few months working on the project. “One volunteer even offered to pitch a tent in my backyard while working on the project,” Gardner adds. A team of virtual volunteers around the world is busy transcribing interviews, conducting research, assisting with distribution and publicity plans, and contributing financially when they can.

Why such an unorthodox method of producing a film? “As a non-profit project, we’ve so far not attracted large foundation grants,” Gardner explains. “GrowthBusters questions one of our most basic beliefs: that growth brings prosperity and well-being. It takes a real visionary to write a check for this project.”

In the absence of substantial institutional funding, the producers are turning to volunteers and like-minded film professionals to cut the cash budget by more than half. Gardner and Maclurcan are harnessing the power of fans who believe the world needs to see this film. “There is a growing movement of people who are restless with ‘business as usual’ and intrigued by the possibilities of a post-growth world,” notes Maclurcan.

“Of course, we still need to raise additional funding, as there are some things volunteers cannot do, like manufacture a DVD,” adds Gardner. With a little more power from the crowd, the filmmakers are confident GrowthBusters: Hooked on Growth will be finished in the coming six months, ready to be shared with the wider world.

GrowthBusters: Hooked on Growth is a non-profit, feature-length documentary planned for release in the first half of 2010. Produced by Citizen-Powered Media, the film examines the sustainability of modern society’s worship of unending economic, population, urban and consumption growth.

Photos, logo and other media information at http://www.growthbusters.org/media-and-bloggers

For a description of the film, see http://www.growthbusters.org/find-out-more/about-the-film