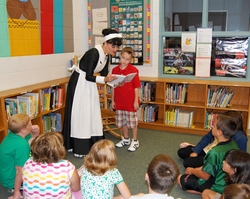 Jaynee, the Titanic Museum Attraction First Class Maid, presents Luke Copas with a copy of his own published book at Northview Primary School.

He has an amazing talent...The first time I read his book, I couldn't believe my eyes. He writes so well and researched this book so deeply that I simply wanted to share it with others.

Earlier this summer, 9-year old Luke Copas toured the new Titanic Museum Attraction in Pigeon Forge, Tenn. with his mother and father, Sabrina and Robby Copas. The fourth grader at Northview Primary School in Kodak, Tenn. was no stranger to the world’s most famous luxury liner; in fact, he had already written a book about it – but his visit to the museum would lead to a huge surprise for the young writer.

Last school year, then 8-year old Luke had been selected to participate in the “Child Authors’ Conference.” An avid reader who loved learning about the past, Luke wanted his book to create a passion in other children for history.

Sabrina Copas said, “Luke became a walking encyclopedia of all things Titanic. He was literally consumed by it. When it came time for him to actually write his book for the Child Authors’ Conference, it took him less than one week to write it because he knew the subject matter so well.”

Luke took his book to the Titanic Museum Attraction and showed it to co-owner Mary Kellogg-Joslyn. Impressed with the boy’s talent and driven by his enthusiasm, Kellogg-Joslyn secretly made a few phone calls and landed the boy a book deal.

“He has an amazing talent,” Kellogg-Joslyn said. “The first time I read his book, I couldn’t believe my eyes. He writes so well and researched this book so deeply that I simply wanted to share it with others.”

On Thursday, Sept. 16, Luke’s entire class at Northview Primary School was summonsed to the school library, where Kellogg-Joslyn and Titanic Museum Attraction First Class Maid Jaynee made a surprise appearance. At first, Luke didn’t know why they were there – but when he saw the first copy of Facts For Kids About the Titanic his face changed expressions.

“That’s MY book!” Luke proudly proclaimed to his classmates and Cub Scout friends who had joined him for his special surprise. Luke Copas’ new book Facts For Kids About the Titanic was released this week and is now available at the Titanic Museum Attraction gift shop.

On Saturday, Sept. 18 from noon until 2 p.m. Luke Copas will sign copies of his new book Facts For Kids About the Titanic in the gift shop at the Titanic Museum Attraction in Pigeon Forge. The gift shop is always open to the public.

Since opening last April, nearly 500,000 visitors have been welcomed aboard Titanic Museum Attraction. The Titanic Museum Attraction – which is conveniently located to all areas of the Great Smoky Mountains National Park, Gatlinburg, Pigeon Forge and Sevierville – is now open every day from 9 a.m. until 9 p.m. ET. Tickets are available online at http://www.TitanicPigeonForge.com and visitors are strongly urged to purchase tickets in advance or make reservations by calling 1-800-381-7670. The museum has something special for each and every member of your family.