National Guard Program that has awarded more than 10,000 GED diplomas nationwide will dedicate its new building on October 21, 2010 to Sgt. Jeffrey W. Jordan who was killed in action in 2009. Jordan was a 2006 graduate of the National Guard GED Plus Program. 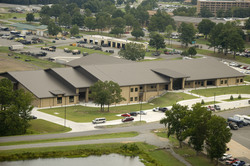 The new, state-of-the-art GED Plus building at Camp Robinson will be dedicated Thursday, October 21, 2010 at 10:00 AM CT in honor of the late Sgt. Jeffrey W. Jordan who was killed in action near Kakar, Afghanistan June 4, 2009. Jordan earned his graduate examination diploma through GED Plus, Dec. 13, 2006.

WHAT: GED Plus Building & Program Dedication Ceremony
WHERE: Camp Robinson, Arkansas
WHEN: Thursday, October 21, 2010 at 10:00 A.M. CT
WHY: Building dedication to Sgt. Jeffrey W. Jordan and GED Plus program to Lt. Gen. (Ret.) Clyde A. Vaughn, former Dir. of the Army National Guard

The new 200,000 square foot GED Plus building features 22 classrooms, 12 barracks to house up to 480 Soldiers, dining facility to accommodate 200 Soldiers per sitting, and is a certified green building. The groundbreaking was held January 25, 2009 and was completed on June 24, 2010.

The GED Plus program began under the vision and leadership of Lt. Gen. (Ret.) Clyde A. Vaughn, former Director of the Army National Guard in 2006. Since then, the program has awarded more than 10,000 graduate examination diplomas to Soldiers throughout the 54 states and territories.

The public is invited and encouraged to attend. Media representatives interested in attending should contact Capt. Kyle Key via cell at (317) 430-6614 for credentialing.