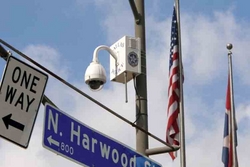 The wireless video surveillance system is an integral part of the City’s three pronged approach to public safety, which also includes beat officers and the citizens that live and work in the area. - Lt. Anthony Crawford, Dallas Police Department

In addition to serving as host city for the ASIS International 56th Annual Seminar and Exhibits, Dallas also provides a great testament to how security technologies can help law enforcement improve public safety and enhance emergency preparedness. A wireless surveillance system in Dallas watches over various parts of the ASIS host city, supplying the Dallas Police Department real-time video from many areas throughout Dallas.

“The wireless video surveillance system is an integral part of the City’s three pronged approach to public safety, which also includes beat officers and the citizens that live and work in the area,” said Lt. Anthony Crawford, Dallas Police Department. “The wireless video system has contributed significantly to crime decreases in the target areas. In fact, from January 1, 2007 to September 28, 2010 the total crime rate is down 37% in uptown Dallas, 35% in downtown, and 59% in Jubilee Park. I believe an important part of that reduction is due to the presence of the camera system.”

Firetide provides the wireless mesh networks for IP video surveillance in the Texas city that transmit high-quality video traffic from the IP cameras. Without wireless mesh, it would have been far more costly to install the cameras where they were needed. In addition, mesh creates alternate wireless links to help ensure high system reliability.

BearCom, a nationwide wireless communications solutions provider, designed and installed the Dallas system beginning with implementation of the first cameras in early 2007. Since then, BearCom has continued to add cameras to monitor various areas throughout the city. The Dallas Police Mobile Command Center, also designed and provided by BearCom, can tie into the system as long as the vehicle is within range of the wireless mesh network.

Experienced police officers in Dallas keep a close watch on live video from cameras mounted about 20 feet off the ground on various light and traffic signal poles and buildings throughout the Downtown and Uptown areas in Dallas, as well as several Dallas neighborhoods, including Jubilee Park and Jefferson Boulevard. Monitoring the video 24 hours a day, seven days a week are sworn active-duty police officers currently serving less than full-duty because of injuries, along with retired police officers working on an hourly basis. Successful public/private partnerships were instrumental in the deployment of the camera systems in several areas of the city, including the Central Business District, the Arts District, the Jefferson Boulevard area, and the Jubilee Park neighborhood.

A total of 152 cameras have currently been installed throughout the city of Dallas, including 126 Sony and 26 Panasonic units, making it one of the largest municipal wireless video surveillance systems in the country. In the City's Southwest Division, for example, 11 cameras have been installed along the Jefferson Boulevard corridor, where small retail stores, mom-and-pop businesses, pawn shops, and similar establishments predominate. These cameras are not monitored in real-time, but officers routinely use the OnSSI software to review video after the fact.

In addition to watching cameras in real-time, the monitoring personnel also cross-check crime reports against video archives to determine if a camera near the location of an alleged crime captured any evidence. There have been 4,518 of these “camera-involved calls” through June of 2010, and there were 6,259 of them in 2009. Making video copies, which requires supervisor approval, helped with 28 incidents through June of 2010 and with 70 incidents last year. The cameras have also been used to monitor events in real-time, for example, in areas like the downtown business district where there are high concentrations of pedestrian and vehicular traffic. The cameras have been used to monitor 112 real-time events through June this year.

Since the cameras have been installed, DPD reports there have been a total of 17,283 calls and 5,016 arrests in surveillance areas in Downtown, Uptown and Jubilee Park thanks in part to the video system. In one incident, a camera operator observed a theft of pay boxes in progress in a pay parking lot and directed officers to make an arrest. In another incident, a person in a military uniform was observed on video having a seizure, and someone stole his wallet during the incident. The next day, the thief was again spotted on video and arrested.

“The Dallas installation is a convincing example of how IP-based systems can capture video from anywhere in a wide geographic area and provide it in an intuitive and user-friendly way precisely when and where it is needed,” said Gadi Piran, President and Chief Technology Officer, OnSSI. “Combining the latest IP camera technologies with wireless mesh networking and OnSSI's video management system provides a great tool for the Dallas Police Department, and ASIS attendees can put those same capabilities to work for their own enterprises.”

“Three and one-half years since the first phase of the project began, the DPD’s wireless video surveillance network is an instructive case study of the crime fighting benefits of such a network and the public private partnership model that has been key to its success,” said Bo Larsson, CEO of Firetide Inc. “The system is also a showcase for Firetide’s high-performance wireless infrastructure mesh, coupled with open-platform IP camera and video management technologies. We look forward to working with the DPD and their partners on the continued expansion of the network which has become integral to the area’s public safety system.”

“We're very proud to be associated with the Dallas Police Department and this project,” said John Watson, Chairman of BearCom. “The success of the DPD surveillance system would not have been possible without the cooperation of our partners. Not only are Firetide and OnSSI innovators and leaders in the wireless communications industry, but more importantly, they worked closely with us to develop a solution that was a perfect fit for the needs of the DPD and the City of Dallas. As a result, BearCom now has an integrated team that can offer similar solutions to other municipalities, police departments, and security organizations that want to leverage wireless technology as an effective and efficient way to combat crime."

About OnSSI
With over 30,000 installations around the world and more citywide deployments than any other video surveillance software solution, OnSSI is the choice of security and IT professionals. OnSSI’s solutions fit needs of all sizes and enable users to choose best-of-breed components, grow with their needs over time and increase productivity and efficiency in order to help security professionals keep their facilities safer more easily. For more information on OnSSI, call 845-732-7900, e-mail info@onssi.com or visit http://www.onssi.com.

About BearCom
BearCom provides a broad line of high-performance wireless communications products, services, and complete mobility solutions. Founded in 1981, BearCom is America’s only nationwide dealer of wireless communications equipment, serves customers from 26 branch offices located throughout the U.S., has several affiliated offices around the world, and employs approximately 400 people. BearCom is headquartered in the Dallas, Texas area. For more information, visit http://www.BearCom.com.