Celebrated world-renowned artist Ralph Wolfe Cowan was commissioned to paint a portrait of 2009 Breeders' Cup Classic winner Zenyatta to be auctioned for charity during the 2010 "RTCA White Horse Awards & Charity Luncheon" held at The Breeders Cup November 4th. Cowan was the only painter that Elvis ever commissioned for a portrait and the full-length masterpiece was the only portrait Elvis ever allowed to hang in Graceland. Liz Taylor, Doris Duke, Donald Trump, and Steve and Elaine Wynn are also among the numerous celebrities whose likenesses have been committed to canvas by Cowan's brush, as well as U.S. Presidents Reagan, Carter and Kennedy. 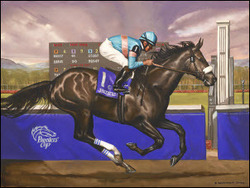 The mare, who has won 19 races without a defeat, remains the queen of the track, and thousands line up to worship her."

The awe-inspiring thoroughbred racehorse Zenyatta, who became the first female to win the Breeders' Cup Classic in its 26th running, last year at Santa Anita, will return to defend her title at the 2010 Breeders' Cup at Churchill Downs on November 6, 2010. World-renown artist Ralph Wolfe Cowan was commissioned to paint Zenyatta's portrait to be auctioned for charity during this year's "White Horse Awards & Charity Luncheon" held at the Breeders' Cup from 10:30 a.m. to 12:30 p.m. November 4th in the Triple Crown Room at Churchill Downs. Cowan's original portrait is expected to raise several thousand dollars, which will benefit Race Track Chaplaincy of America (RTCA), a non-profit organization that addresses the spiritual, emotional, physical and social/educational needs of horse racing's vast workforce. Enthusiasts who will not attend the luncheon, but wish to participate in the live auction, the proceedings will be streamed live at http://www.worldwideauctiongroup.com.

Having won 19 consecutive races, Zenyatta has captured the attention of horse racing fans worldwide. The superb mare is not only the fastest horse on the track, she's got star charisma. Zenyatta prances on the track in the post parade before every start, and does a victory dance after she wins, much to the delight of her ecstatic fans.

Zenyatta's champion spirit caught the attention of longtime racing fan Estille Vaughn, owner of Vaughnco Stables of Cynthiana, Kentucky. Vaughn knew of an artist who lived in Lexington throughout the 1970s who painted many of the thoroughbred horse farm owners, their families and horses. After researching artist Ralph Wolfe Cowan, Vaughn learned that Cowan was named the number one portrait painter in the world by art historian Warren Perry in a 2009 lecture at the National Portrait Gallery in Washington, D.C.

Vaughn knew if he could get the celebrated artist to paint the world's greatest horse Zenyatta, it would be the most magnificent thoroughbred racing painting of our time. Zenyatta has never raced east of the Mississippi. "And, I think she's going to win!" Vaughn uttered excitedly.

Cowan was excited by the challenge of capturing Zenyatta's magnificence, power and speed. "To be able to capture that excitement on canvas can be quite difficult, but I nailed it," Cowan said confidently. "As I was painting her, it was almost as if I could feel her spirit. I could sense her determination and strength." About her look, Cowan addresses, "she has a beautiful consistent sheen throughout her dark brown coat with a muscular, yet streamlined body. And, wow, does she have a stride."

Following Zenyatta's October 2, 2010 $250,000 win of the Zenyatta Stakes (formerly Lady's Secret Stakes)* at Hollywood Park, Los Angeles-area newspaper columnist Bill Dwyre wrote, "The mare, who has won 19 races without a defeat, remains the queen of the track, and thousands line up to worship her."

About The 2009 Breeders' Cup Classic Winner:
Zenyatta, who became the first female to win the ($5 million) Breeders' Cup Classic in its 26th running, last year at Santa Anita, will return to defend her title at Churchill Downs on November 6, 2010. The Breeders' Cup Classic is arguably the world's greatest race, and Zenyatta will be making her first start east of the Mississippi in this year's event. Jerry and Ann Moss of Los Angeles, California are Zenyatta's proud owners.

*In November 2009, Southern California's Lady's Secret Stakes race was renamed the Zenyatta Stakes after the magnificent mare who won the race in 2008, 2009 and 2010.

About The Artist:
Ralph Wolfe Cowan is considered the number one portrait painter in the world and has been recognized for painting more reigning monarchs and world leaders than any other painter in history.

In 1956, he painted the legendary portrait of HSH Princess Grace. In 1981, he returned to Monaco when commissioned to paint the now famous full-length painting of the entire family. He subsequently delivered portraits of HSH Prince Albert, HRH Prince Ernst and Princess Caroline, and HSH Princess Stephanie. Among his other Royal patrons are H.M. Sultan of Brunei, H.M. King Fahd of Saudi Arabia, H.M. King Hassan II of Morocco, the Royal Family of Monaco, President and Mrs. Marcos, President Mikhail Gorbachev and U.S. Presidents Reagan, Carter, and Kennedy.

Cowan was the only painter that Elvis ever commissioned for a portrait and the full-length masterpiece was the only portrait Elvis ever allowed to hang in Graceland. He painted six album covers for Johnny Mathis including his first album "Heavenly." Julio Inglesias, Liz Taylor, Ava Gardener, George Hamilton, Kenny Rogers, Debbie Reynolds, Doris Duke, Donald Trump, Steve and Elaine Wynn, wide-receiver for the Philadelphia Eagles Freddie Mitchell, and Masters Champion Gay Brewer are just a few of the many celebrities touched by Cowan's brush.

Cowan's paintings are celebrated in many palaces, museums and art galleries around the world.

About Race Track Chaplaincy Of America (Rtca):
Organized in 1971, RTCA is a non-profit organization whose mission is to provide, with excellence, for the spiritual, emotional, physical and social/educational needs of horse racing's vast workforce. RTCA sanctions 53 chaplains who serve at 70 tracks and training/breeding centers throughout North America and around the world. http://www.rtcanational.org/