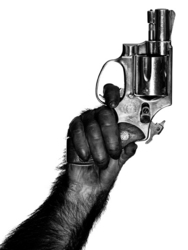 Hasted Kraeutler is pleased to announce an exhibition of photographs by Albert Watson. After exhibiting around the world, this is the artist’s first major gallery exhibition in the United States.

The works in this exhibition span nearly forty years of the photographer’s career, from Hitchcock with Goose, 1973, (“the first famous person that I shot...”) to Jellyfish Tank at Mandalay Bay Hotel, 2001, three haunting, large-scale abstract photographs from his gorgeous and surreal body of work made in Las Vegas. As James Crump has notably written in Albert Watson (Phaidon, 2007), “although Watson’s subjects may see disparate at first, on closer inspection they plot an artistic trajectory held tightly together by a thread of perfectionism, casting objects, bodies, fashion into finely honed symbols of desire, ennui and dreamlike immersion.” Many of the photographs on view have been selected because they reveal Watson’s process: from Monica Gripman, St. John, whose composition comes from a “try-on” shot to Mick Jagger, Los Angeles, 1992, created with a spontaneous old-fashioned double exposure, one sees how Watson is both highly masterful and open to experimentation.

Albert Watson has created an exclusive edition of Platinum prints of some of his most iconic photographs (including Hitchcock with Goose, 1973, Christy Turlington, 1990, and Kate Moss (back), Marrakesh, Morocco, 1993), especially for this exhibition. These works are printed in Belgium and will be available in a limited edition of three. This exhibition also coincides with the release of two new limited edition books and archival pigment prints of 500 copies, Strip Search: Las Vegas and UFO: Unified Fashion Objectives (PQ Blackwell in association with Abrams, 2010). Watson’s other books and catalogs include Cyclops (Bulfinch, 1994), Maroc (Rizzoli, 1998), The Vienna Album (Schirmer/Mosel, 2005), Albert Watson (Phaidon, 2007), and Il Coniglio Bianco (Contrasto, 2009).

Born and raised in Edinburgh, Scotland, Albert Watson studied film and television at the Royal College of Art in London before he moved to the United States to launch a career in photography in 1970. Last year, readers of Photo District News named Albert Watson one of the twenty most influential photographers, demonstrating that he is a “photographer’s photographer,” and has had a huge impact on his peers and photographers of future generations. Watson has received many honors, including a Lucie Award for lifetime achievement in photography, a Grammy Award for the cover of the Mason Profitt album, Come and Gone (1975), and three ANDY Awards for creativity in advertising. On September 9, 2010, the Royal Photographic Society awarded Albert Watson their Centenary Medal, which recognizes outstanding contributions to the art and science of photography.

Albert Watson has had solo exhibitions of his work at the Museum of Modern Art in Milan, Italy, the KunstHausWien in Vienna, Austria, the City Art Centre in Edinburgh, Scotland, the FotoMuseum in Antwerp, Belgium, the NRW Forum in Düsseldorf, Germany and the Forma Gallery in Milan. Watson’s photographs have also been shown at the National Portrait Gallery in London, the Metropolitan Museum of Art in New York, the Pushkin Museum of Fine Arts in Moscow, the International Center of Photography in New York, the Brooklyn Museum, and the Deichtorhallen in Hamburg, Germany. His photographs are included in the permanent collections of many of these prominent institutions.

For press inquiries or further information, please contact the gallery at info@hastedkraeutler.com or 212-627-0006. The exhibition will open on Thursday, October 21, with a reception for the artist from 6 - 8 p.m. The artist will also be present for a book signing on Saturday, October 30 from 4 - 6 p.m.