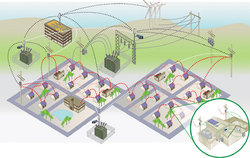 In the short term, our Smart Grid initiative is all about increasing our operational efficiency by reducing truck rolls and improving meter reliability

Trilliant Incorporated, a Smart Grid communications provider and leader in delivering solutions that enhance energy efficiency, utility operations, and renewable resource integration, today announced that Denton Municipal Electric (DME) in Denton, Texas has selected Trilliant as the communication network solution for their Smart Grid implementation. Following a successful pilot program, DME is moving ahead with a replacement of their existing AMR system with the expectation to replace a total of 45,000 meters over a five-year period.

Denton is located near the Dallas-Fort Worth metropolitan area, with a population of more than 100,000 citizens. DME is owned by the residents of Denton, and offers safe, reliable service and competitive rates.

After reviewing proposals from a number of Smart Grid technology companies, DME selected Trilliant on the basis of their sophisticated multi-tier architecture and in particular as a result of the broadband wireless technology in place as a result of Trilliant’s acquisition of SkyPilot in May 2009.

In the near term, costs savings will be passed on to consumers as a result of the operational improvements now planned by DME.

"In the short term, our Smart Grid initiative is all about increasing our operational efficiency by reducing truck rolls and improving meter reliability," according to Kyle Tunnell, Meter Planner and Coordinator at DME. "At the same time, we are putting a sophisticated two-way communication infrastructure in place that will allow DME to deploy more advanced Smart Grid applications over time."

DME will begin the first stage of deployment in November by replacing more than 5,000 aging meters. Within a five-year period, all 45,000 business and consumer meters will be replaced.

"Our pilot program really opened our eyes to what is possible with a Smart Grid infrastructure in place," added Tunnell. "Not only did we experience a 99.99% accuracy rate, we were also able to significantly reduce truck rolls."

DME's coverage area is particularly challenging to the utility owing to the high turnover rate of their users. Denton is home to two universities, a population of users that typically move frequently. High residential turnover would typically require a costly and inefficient truck roll to turn service on or off. DME has significantly reduced the need for truck rolls in the piloted area, and now plans to bring that operational improvement to their entire coverage area.

Examples of the kinds of advanced Smart Grid applications that are soon to be available to DME include Time-of-Use rates, improved outage notification, in-home thermostat integration, pre-paid metering, and more.

"We are honored to have been selected by DME to implement their Smart Grid infrastructure," according to Eric Miller, Senior Vice President Solutions at Trilliant. "Through their successful pilot program, DME has seen the benefit of operational improvements as well as the future potential for more efficient energy management."

About Trilliant Incorporated
Trilliant Incorporated provides hardware, software and service solutions that deliver on the promise of Advanced Metering and Smart Grid to utilities and their customers including improved energy efficiency, grid reliability, lower operating cost, and integration of renewable energy resources. Since its original founding in 1985, Trilliant has been a leading innovator in the delivery and implementation of energy management systems, including advanced utility wireless data collection for residential and commercial customers, demand response, time-of-use billing, and critical peak pricing initiatives. Trilliant currently has more than 200 utility customers including Hydro One, the single-largest Smart Grid implementation in North America. For more information, please visit http://www.trilliantinc.com.