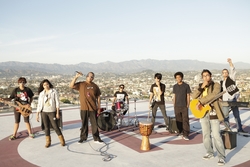 “Shooting The Bricks music video on the roof of this luxury condo in the heart of Koreatown, and holding the press conference here as well, is a clear example of working together in a diverse community." explains HRC rep, Fidel Rodriguez.

Community, luxury and the arts came together harmoniously this week when ST Residential’s Solair Wilshire hosted a press preview and live performance for the debut of the teen musical group, The Bricks. Wednesday night’s press conference also premiered the group’s new music video that was filmed on Solair’s roof, with a 360-degree view of the city. The debut of this 8-member, multi-cultural band took place in front of over 200 dignitaries, press, friends and family gathered on the 7th floor pool deck of the new luxury condominium high rise on the corner of Western and Wilshire. The event was the culmination of a year-long project by the Los Angeles County Commission on Human Relations (HRC), with the support of the L.A. Music Academy and Grammy-winning music industry professionals, to communicate a message of unity amid diversity.

See The Bricks video shot on the roof of Solair at http://www.youtube.com/thebricksla.

Also, watch the Bricks’ live performance at the press conference as well as interviews with the band members and ABC’s George Pennacchio, at http://abclocal.go.com/kabc/story?section=news/hollywood_wrap&id=7737401.

After a year of intensive search and training, the HRC selected eight students from among hundreds of applicants for the chance of a lifetime to launch their music careers. The diverse group of 16 to 18-year-olds that makes up The Bricks found inspiration in their personal journeys – which have included violence, death, illness, poverty and lack of resources – and those of other disenfranchised groups, to write their own lyrics and formulate a distinct sound that blends rock, hip hop and soul. Music heavyweights, including Grammy Award winning producers KC Porter and JB Eckle, have mentored and encouraged the group along the way.

“Shooting The Bricks music video on the roof of this luxury condo in the heart of Koreatown and holding the press conference here too is a clear example of working together and supporting each other in a diverse community,” explains Fidel Rodriguez, Senior Human Relations Consultant and Racialized Gang Violence Prevention Specialist at HRC. “It is this kind of private sector partnership that will increasingly make these kinds of amazing projects possible in Los Angeles County."

The Bricks will tour selected campuses and L.A. County Probation facilities throughout Los Angeles County beginning in November, performing their tracks and engaging in discussions with other youth about human relations topics including violence against the homeless, racism, sexism, homophobia, xenophobia, and others. The music will be available as digital downloads on iTunes as well as on the L.A. County Human Relations Commission’s website, http://www.LAHumanRelations.org. Additional tools that support the messages in the music of the Bricks, including posters and murals, are available to educational facilities.

About The Bricks
The Bricks youth musical group was developed from the HRC’s youth music and human relations mentoring program, Project One. HRC had assistance from Grammy award winning producer KC Porter’s co-founding non-profit organization, Oneness. The Bricks launches HRS’s ground-breaking approach to mentoring youth musicians and educating young people using entertainment, hence the term “Edutainment.” The L.A. County Human Relations Commission is one of the leading counties across the nation in combining the music of The Bricks with its “Respect 101” campaign. The campaign engages students, parents, teachers, and schools to integrate human relations topics into the school culture.

About Solair Wilshire
Solair Wilshire is a 22- story luxury residential high rise at the intersection of Wilshire and Western in the heart of Los Angeles. Ultilizing concrete, glass and steel, Solair brings together clean lines and contemporary architecture to become a vital part of today’s LA cityscape. Standing sentinel in front of a red line Metro Stop and across from the historic Wiltern Theater, each residence at Solair is designed and finished with natural materials, luxurious amenities and breathtaking views ranging from Hollywood to the Pacific Ocean. http://www.solairwilshire.com

Solair is a member of the ST Residential family of luxury condominium properties. ST manages its portfolio with an unmatched level of dedication to enhancing every aspect of ownership at each of its unique locations. http://www.stresidential.com