This thought-provoking book details Karen Miranda’s life and her experiences with the gift to see, hear, and feel spirits. 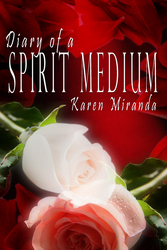 Diary of a Spirit Medium

Diary of a Spirit Medium, a new book by Karen Miranda, has been released by RoseDog Books.

Diary of a Spirit Medium is about Karen Miranda’s life and her experiences with the gift to see, hear, and feel spirits. When she made her First Holy Communion, she never felt like she was alone; Miranda could feel a presence around but could not see anyone. Later on, when she was 12 years old, she gave a message to her aunt at her uncle’s funeral. Years later, she got married and had three children. Six months after having her third child, everything changed. She was diagnosed with multiple sclerosis, and started hearing, seeing, and feeling spirits. Miranda thought there was something more seriously wrong with her than just having M.S., because some information that she was giving people from their loved ones that have crossed over was being validated. Miranda was eventually led to the First Spiritualist Church of Quincy, where she learned how to control what was going on. She also discovered that she was not alone; there were other people just like her.

Karen M. Mastandrea, was born in the town of Norwood, Massachusetts, where she lived until she was 29, excepting her time in the convent in her early twenties. She was married when she was thirty years old, and now lives in Quincy, Massachusetts, and has three children. Miranda has done demonstrations as a spirit medium at some of the area churches, and she has also done some cancer charity work for one of her friends.

Diary of a Spirit Medium is a 102-page paperback with a retail price of $13.00. The ISBN is 978-1-4349-8017-5. It was published by RoseDog Books of Pittsburgh, Pennsylvania. For more information or to request a review copy, please visit our virtual pressroom at http://www.rosedog.com/pressroom or our online bookstore at http://www.rosedogbookstore.com.