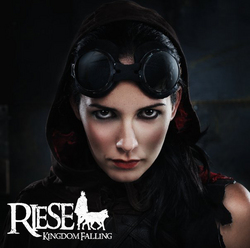 Riese: Battle for Eleysia, inspired by the hit webseries

The game itself allowed us to create a larger world, with new characters and inventions, that can eventually become part of the live actions series.

Genius Factor Games (http://www.geniusfactorgames.com) a Vancouver based game developer, as part of its transmedia strategy, is proud to introduce its second title created exclusively for the Apple iPhone® and iTouch®.

Featuring the voice of Felicia Day (The Guild, Dr. Horribleʼs Sing Along Blog), this RPG card battle game lets players battle for control as the deadly Sect, the glorious Eleysian Army, or the dedicated Resistance, all in an effort to conquer and rule the land of Eleysia!

Players can customize their decks of over 60 gorgeous cards and 24 modifier cards to develop packs that best suit their own personal battle strategy, track their progress with OpenFeint achievements, unlock additional content as they play through the campaign and immerse themselves in the Riese world with Feliciaʼs narration and the riveting series soundtrack composed by Rich Walters.

“Riese: Battle for Eleysia is built upon the rich and diverse canon from the already successful show and sets the stage for another unique and deep way for fans to explore and engage in the series,” says Ted Nugent, President of Genius Factor Games. “Our focus on independent IP naturally aligns us with production companies like Riese Productions, Ltd. and we are extremely excited about future transmedia projects.”

A product update is already in the works with additional features including head-to-head multiplayer, supplemental content and other improvements. The update is slated for release around mid December 2010. An iPad specific version is also in development and anticipated in early 2011.

“Working with GFG on the Riese: Battle for Eleysia game has furthered our goal of being truly transmedia,” says series co-creator Kaleena Kiff. “The story we're telling with the live action series is the basis for the game, while the game itself has allowed us to create a larger world, full of depth and new characters and inventions that will eventually become a part of the live action series. With the two fueling one another, we feel like we're just beginning to scratch the surface of the expanding stories we'll soon be able to tell with both the series and the game.”

Riese: Battle for Eleysia is available now in the Apple App Store (http://bit.ly/aSeqER) for $3.99.