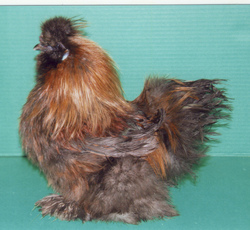 Ornately colored and covered in fluffy, silk-like feathers, silkie chickens are among the most beautiful of the chicken breeds and provide companionship, top-quality eggs, and the opportunity to show them at poultry shows.

A leader in the bearded bantam silkie chicken breeding industry, Amber Waves is proud to offer exotic, conformationally correct silkie chicks for sale. Ornately colored and covered in fluffy, silk-like feathers, silkie chickens are among the most beautiful of the chicken breeds and provide companionship, top-quality eggs, and the opportunity to show them at poultry shows. Known for their docile, friendly nature, silkie chickens are an excellent choice for poultry novices and experts alike, and with the holiday season right around the corner, silkies make an excellent present for that special someone on your list.

Backyard chicken coops in rural, suburban, and urban areas are skyrocketing in popularity due to the demand for top-quality, fresh eggs and the desire to have rewarding, easy to raise pets. Jump on the bandwagon by beginning (or adding to) your flock by purchasing silkie chickens from Amber Waves. Amber Waves sells white, blue, black, buff, splash, partridge, and lavender colored silkie chicks year round, all of which are of the highest quality and health. You will never be alone while raising your silkie chickens; each silkie chicken purchased from Amber Waves comes with Lifetime Support, meaning you have a knowledgeable resource at your disposable should you ever have any questions.

Over its 28 year history, Amber Waves has produced award winning bearded bantam silkie chickens that are highly sought after for breeding, showing, and family pet purposes. Recently featured on The Tori and Dean Show on the Oxygen Network, the silkie chickens of Amber Waves made quite an impression during their television debut, so be sure to order yours soon to ensure you get the amount and colors you are looking for.

Amber Waves ships silkie chickens that are at least one month of age nationwide. Visitors are welcome at Amber Waves by appointment, and customers may pick up chicks younger than one month during their visit. To purchase bearded bantam silkie chickens from Amber Waves and for more information on the breed in general, visit http://showsilkies.com/ or call (951) 736 – 1076 or Cell (951) 233-4231.