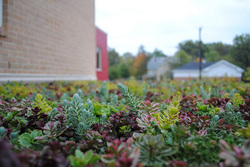 The three green roofs at Casey Trees' new headquarters contain a variety of sebum, hearty vegetation that can withstand the harsh conditions of urban roofs.

It was included as one of more than 150 projects in the Sustainable Sites Initiative™ (SITES™) Pilot Program and features three green roofs covering just over 25% of the roof area.

Casey Trees has moved into its permanent Brookland headquarters at 3030 and 3015 12th Street NE, marking the first time administrative and tree yard operations are at the same location.

The administrative building, half new, half renovated, is approximately 10,000 square feet. It was included as one of more than 150 projects in the Sustainable Sites Initiative™ (SITES™) Pilot Program and features three green roofs covering just over 25% of the roof area. The remaining roof is covered by a white surface called a “cool roof,” which reflects sun off the building and keeps its interior cool.

As an added feature, a cistern is being designed to capture rainwater from the roof and will be installed in the existing garage. When a rain event is greater than its capacity, it will spill water directly into the bioretention planter. Water from the cistern will be allowed to drain into the planter to virtually eliminate any rainwater being transferred into the storm sewer system.

Construction is nearing completion and Casey Trees still plans to plant 13 trees — baldcypress, Jefferson American elm, river birch, sycamore and sweet gum, all chosen by Casey Trees staff — in the rain garden and in the retention planters along 12th Street. The rain garden, which will add seasonal interest to the new building, will contain interpretive signage for the public to learn more about the types of trees planted.

We could not have done this work without the gracious support of our partners. A District Department of Transportation (DDOT) grant paid for the cost of installing the bioretention planters and silva cells supporting the sidewalk along 12th Street NE. The District Department of the Environment (DDOE) funded the green roofs, bioretention planter and cistern at the administrative building.

Adjacent to the 3030 building is Casey Trees’ holding yard, where we store trees, shovels and other tools used in community plantings across the city. A former brownfield, we transformed the site by removing underground storage tanks. We can proudly say this old gas station is now a “green station” with a planting bed along 12th Street that contains trees, shrubs and grasses instead of broken asphalt and glass.

Please contact Jared Powell, Director of Communications, if you would like to tour the new facility. Casey Trees will host a city-wide open house in April in conjunction with Arbor Day. To download more photos of the new building, click here.

The new headquarters is a 10-minute walk from the Brookland-CUA Metro station and are also accessible by several bus routes.

About Casey Trees:
Casey Trees is a Washington, DC-based not-for-profit organization established in 2001 committed to restoring, enhancing and protecting the tree canopy of the Nation’s Capital. To learn more about Casey Trees, visit http://www.caseytrees.org.