Walk the Red Carpet with Brian Tracy at the premiere of the documentary “The Journey” and then participate in a full day Personal and Financial Growth seminar. The combined events support the Generation Why Foundation, dedicated to helping get homeless kids off the streets. Giving back is part of the journey 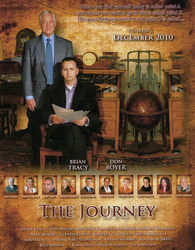 I looked at the national stats and was blown away to find out that one in 50 kids in the United States of America is homeless. That is over 1.6 million children that don't have a place to call home

December is the traditional season for giving. The red carpet movie premiere of the movie "The Journey" (http://www.thejourneymovie.net) provides a celebrity platform to raise funds and awareness for the 1.6 million homeless kids in America. The film stars legendary business philosopher Brian Tracy and a cast of luminary visionaries and the premiere will be held December 9, 2010 at the Cinema City Stadium Theatre.

On December 10, 2010 the Celebration of Life Personal and Financial Growth Seminar takes place at the Westin LAX hotel in conjunction with the movie premiere as a number of the primary cast members are also keynote speakers. The noted strategists are holding this one day event to bring 2010 to a close and prepare for 2011. Cost for the seminar is $47 and includes a V.I.P. invite to the premiere. A portion of the proceeds are to be donated to the Generation Why Foundation.

The Celebration of Life speakers are among the top speakers in the world including Nik Halik (http://www.nikhalik.com) , global wealth strategist and founder of the Thrillionaires; Rich German (http://www.richgerman.com) , author and creator of Monetize Your Passion; Amy Applebaum, champion of the woman's movement and creator of Release Your Inner Millionairess; Ridgely Goldsborough, author of The Great Ones; and Don Boyer (http://www.thepowerofmentorship.com) , best-selling author of the series The Power of Mentorship and producer of the movie “The Journey”.

Watch the trailer for “The Journey” here on YouTube.com: http://www.youtube.com/watch?v=cxtAHbVNsrg&feature=player_embedded

The combined events are a fundraiser for the Generation Why Foundation (http://www.genwhymovie.com), a nonprofit dedicated at getting homeless kids off the streets. Rich German, foundation founder, author and life strategist explains.

“I looked at the national stats and was blown away to find out that one in 50 kids in the United States of America is homeless. That is over 1.6 million children that don’t have a place to call home,” German states. “So I personally decided to do something about it. I started the foundation with the goal to both raise awareness around this hidden reality and to create real solutions for homeless youth.”

To that end, German is giving away his latest book (Monetize Your Passion) for a donation to his foundation that helps homeless youth. The entire income from the donations for the book … 100 percent of the income … is being used to bring awareness to the problem he found exists in this country.

Ridgely Goldsborough helped organize the Celebration of Life talks about his role in the movie and the seminar and why he wants to add their support to the Generation Why Foundation.

“As one of the cast members of “The Journey”, it is such an honor to share the screen with the legendary Brian Tracy and the other visionaries. We hope to impact the lives of many with our message, and with the knowledge that many tools are needed to succeed in a meaningful way at anything,” said Goldsborough.

Goldsborough adds, “For all of us, as it so aptly stated by the title itself, this thing called life is indeed, a journey. We want to support Generation Why Foundation because giving back to our community is an important part of that journey.”

About Gen Why Foundation & “Generation Why” documentary film
The film “Generation Why” will take an in-depth look into the lives of a few of the more than 1.6 million homeless youth struggling for survival in America today. The filmmakers hope not only inform and educate Americans about the issues facing our youth, but also inspire them to care and act.

The film will include a collection of interviews with celebrities, foster youth, teens, homeless survivors, and those who currently serve the homeless youth community. The ultimate goal of “Generation Why?” is to create awareness and build strategic alliances that will provide opportunity for eliminating youth homelessness in the United States.

The Gen Why Foundation was created by Rich German and Change For Balance Productions with plans to use an internet and social media campaign to raise funds for the production and distribution for the film. Launched in unison with the documentary, the foundation’s effort will be in supporting homeless youth once the film has been completed. The goal is to use the influence of the film to create strategic alliances with non-profits, businesses, educators, physicians, athletes, artists, and anyone else interested in contributing to their efforts to find a solution to this epidemic.

About Celebration of Life
The Celebration of Life registration costs $47 per person and includes a donation to the Generation Why Foundation along with a ticket to the movie premiere as long as supplies last. Tickets are limited to the first 75 who register. Registration begins at 8 a.m., with the seminar starting at 9 a.m. The event is being held at the Westin Hotel LAX, 5400 West Century Blvd. Los Angeles, CA.

The premiere for “The Journey” being held at the December 9, 2010 in Anaheim includes the opportunity to: Walk the Red Carpet at a worldwide movie premiere … Get your picture taken, led by interviewer extraordinaire, Lisa Jimenez … Meet legendary business philosopher, Brian Tracy, the star of the movie. Enjoy the movie and reception, with MC Ridgely Goldsborough and meet and have your picture taken with other stars of the movie, including the ultimate Thrillionaire, Nik Halik. The movie premiere is held at Cinema City Stadium Theater, 5635 E. La Palma Avenue, Anaheim Hills, CA.

The Celebration of Life Seminar will be held on December 10, 2010. A number of the cast members from the film “The Journey”, will hold a one day event to bring 2010 to a close and prepare for 2011, as well as support the Generation Why Foundation. Speakers include: Rich German, author and creator of Monetize Your Passion; Nik Halik, global wealth strategist and founder of the Thrillionaires; Amy Applebaum, champion of the woman's movement and creator of Release Your Inner Millionairess; Don Boyer, best-selling author of the series The Power of Mentorship; and producer of the movie “The Journey;” and Ridgely Goldsborough, author of The Great Ones.

Rich German is giving away his book Monetize Your Passion to help homeless kids get off the street.