With a squad of 14 robots that worked together autonomously in a complicated mapping exercise, the University of Michigan’s “Team Michigan” has won the inaugural Multi Autonomous Ground-robotic International Challenge (MAGIC 2010) in Australia. 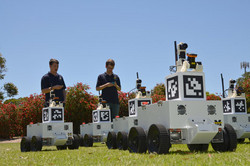 Behind Team Michigan’s robots was an amazing group of students who spent countless hours building, programming and testing the entire team of robots – and they also dealt with the formidable logistical challenges of putting everything together.

With a squad of 14 robots that worked together autonomously in a complicated mapping exercise, the University of Michigan’s “Team Michigan” has won the inaugural Multi Autonomous Ground-robotic International Challenge (MAGIC 2010) in Australia.

A joint initiative of Australia’s Defence Science and Technology Organisation and the U.S. Army Research, Development and Engineering Command’s Tank Automotive Research Development and Engineering Center (TARDEC), MAGIC 2010 spanned more than two years with a stated goal of furthering the development of robot teams that could operate autonomously in dangerous situations, keeping Soldiers out of harm’s way.

With the win, Team Michigan and partner SoarTech (Ann Arbor, Mich.) earned a grant of $750,000 (USD). Earning second place and a $250,000 grant was the team from the University of Pennsylvania (Philadelphia). Team Reconnaissance and Autonomy for Small Robots – RASR – (Gaithersburg, Md.) earned $100,000 for third place.

“Behind Team Michigan’s robots was an amazing group of students who spent countless hours building, programming and testing the entire team of robots – and they also dealt with the formidable logistical challenges of putting everything together and shipping it 10,000 miles away,” explained Assistant Professor Edwin Olson, team lead from the Electrical Engineering and Computer Science Department at the University of Michigan. “MAGIC 2010 gave us a chance to show that our research translates to the real world.”

Rounding out the top five teams that competed in the Grand Challenge last week at the Royal Showgrounds in Adelaide, South Australia, were teams Cappadocia (Ankara, Turkey) and MAGICian (Perth, Australia).

MAGIC 2010 featured some of the world’s most ground-breaking robotics technologies as the teams deployed a total of 43 robots to navigate a 250,000 square-meter indoor and outdoor course over three-and-a-half hours. Teams were judged on a number of factors including the maps they produced and the time they took to complete three increasingly complex challenge phases. Teams were penalized for the amount of time they manipulated their robots manually.

“The inaugural MAGIC 2010 competition brought together top robotics researchers from around the world to push the boundaries of ground robotics,” Bochenek explained. “The work accomplished in terms of a team of robots working together will directly benefit our Soldiers now and in the future.”

Following the official MAGIC 2010 announcement, 23 teams submitted entries from around the world. The five teams from the United States, Turkey and Australia were selected by the U.S. and Australian defense departments after a two-phase down select to compete in an effort to develop the next generation of fully-autonomous ground robots.

“This was an outstanding competition and I have been blown away by the technologies these teams demonstrated,” explained TARDEC’s Dr. Jim Overholt, the Army’s senior research scientist for robotics. “I am sure we will look back upon MAGIC 2010 as a watershed moment for our Soldiers.”

ABOUT RDECOM
The U.S. Army Research, Development and Engineering Command is the Army's technology leader and largest technology developer. RDECOM ensures the dominance of Army capabilities by creating, integrating and delivering technology-enabled solutions to our Soldiers. To meet this commitment to the Army, RDECOM develops technologies in its eight major laboratories and research, development and engineering centers. It also integrates technologies developed in partnership with an extensive network of academic, industry, and international partners.

RDECOM provides the Army with an organic research and development capability. More than 17,000 Soldiers, civilian employees and direct contractors form this world-class team. As part of that team, there are 11,000 engineers and scientists, many of whom are the Army's leading experts in their fields. A fundamental characteristic of this workforce is the focus on the Soldier. Whether providing technology solutions to meet current operational needs or developing break-through technologies for the next generation, RDECOM stands at the forefront of what the Soldier eats, wears, fires, flies or drives.

ABOUT TARDEC
Headquartered at the Detroit Arsenal in Warren, MI, TARDEC is the Nation's laboratory for advanced military automotive technology and serves as the Ground Systems Integrator for all DOD manned and unmanned ground vehicle systems. With roots dating back to the World War II era, TARDEC is a full life-cycle, systems engineering support provider-of-first-choice for all DOD ground combat and combat support weapons, equipment and vehicle systems. TARDEC develops and integrates the right technology solutions to improve Current Force effectiveness and provides superior capabilities for Future Force integration. TARDEC’s technical, scientific and engineering staff lead cutting-edge research and development in Ground Systems Survivability; Power and Mobility; Intelligent Ground Systems; Force Projection; and Vehicle Electronics and Architecture. TARDEC is a major research, development and engineering center for RDECOM and an enterprise partner in the TACOM LCMC.