Bill Clinton's Secretary of the Interior, Bruce Babbitt, calls for an end to the "Leninist" policies that sustain the myth of free and plentiful water in the West. In an address broadcast by Fora.tv from the recent conference by Global Water Intelligence in Washington DC, Babbitt, the former governor of Arizona, suggests that politicians seeking re-election on the basis of cheap water are drying out the west, and delivers a frank mea culpa, owning up to finding hidden ways to subsidise water when he was running the fourth driest state. 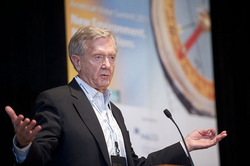 "How is it that the USA, the historic manifestation of market economies, the ultimate stronghold of capitalism, has the most public, least privatised water systems on the planet?”

Speaking in the 'Water Policy Futures' session Bruce Babbitt argues that the Leninist dogma is rife and peculiar to the American water industry. "How is it that the USA, the historic manifestation of market economies, the ultimate stronghold of capitalism, has the most public, least privatised water systems on the planet?" The US government, he explains, created a vast centralised infrastructure "sold in an environment which says, 'water is something that should be free and delivered by government in unlimited quantities at virtually no cost'. Now, is that a market model or a Leninist model?" The effects of this, Babbitt argues, have been quite predictable - the creation of an unlimited demand, most graphically demonstrated by peoples' commitment to open-air lifestyles in places like Los Angeles, where 50% of consumption is used outdoors.

When Governor of Arizona, where he set up new legislation enabling the Central Arizona Water Project, Babbitt admits to being in the throes of the Leninist tradition, forcing water prices down by diverting revenue from the Hoover Dam's electrical power generation and using it to pay for the water project, and also shifting the burden from water users by raising the state-wide property tax base.

However, Babbitt expects the recent election to be a 'transformational moment', away from public sector provision. "As this political shift takes place we're going to see a renewed discussion of the relative balance and allocations of functions between public financing and public systems at all levels, and the appropriate role of private financing and enterprise participation in the water market."

He agrees with Robert Kennedy Jnr., who gives the introductory speech to this session, that water is a public, common resource, but stresses that this doesn't answer the question about how we allocate the economics and the equities of developing and distributing this resource. Until there is a consensus that purchasers of water should pay the true price, he argues, then the playing field cannot be levelled, and efficiency and cost-effective solutions cannot be achieved.

Stripping out the hidden subsidies in both public and private sectors means that water can be priced for its real value, and along the way improve conservation and efficiency. The finance field must also be levelled, Babbitt argues: "We have a huge infrastructure deficit and we will be going to financial markets, some mix of public and private, but right now, the deck is stacked in favour of subsidised public financing." The Build America Bond is the first example of this, designed to drive down the cost of infrastructure financing. "It's a hidden subsidy which says to water users that water's free." The Water Quality Revolving Fund, financing waste water treatment plants, and the Private Activity Bonds are further examples of hidden subsidies that need to be dismantled in order to achieve transparency and realistic pricing.

Other speakers in the session are Anne Castle, Assistant Secretary for Water and Science at the US Department of the Interior, and George Hawkins, General Manager of the DC Water and Sewer Authority, introduced by Bill Bertera, Executive Director of the Water Environment Federation (WEF).

GWI's first water Summit for the USA attracted over 200 delegates from across the USA's water industry. Andy Seidel, Chief Executive Officer & President of Underground Solutions, Inc., commented "I thought it was the best conference I've been to in water. Great mix of attendees, terrific speakers and well organized."