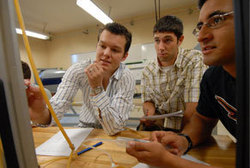 Engineering majors at George Fox, a Christian college, will demonstrate their machines Dec. 9.

George Fox University’s engineering degree program will host its annual engine competition on Thursday, Dec. 9, when freshmen students showcase the projects they have built as part of their engineering major.

The university’s seventh annual “Wobble-Off” competition is scheduled from 2:30 to 4:30 p.m. in the Ron Gregory Atrium in the Edwards-Holman Science Center on the school’s Newberg, Ore., campus.

The demonstration will feature a variety of oscillating steam/air-operated engines. The event is the culmination of the students’ first-year studies in engineering design, solid modeling and machining. The engines will compete in a variety of categories, including maximum speed, minimum vibration, maximum coast, cost efficiency and creativity/craftsmanship.

The public is invited to attend at no charge.

The university is one of only 13 CCCU schools nationwide that offers a four-year engineering program with accreditation from the Accreditation Board for Engineering and Technology. The CCCU has 110 members in North America and 75 affiliate institutions in 24 countries.

George Fox University is ranked by Forbes as the top Christian college in the Pacific Northwest and among the top three Christian colleges in the country. George Fox is the only Christian university in the Pacific Northwest classified by U.S. News & World Report as a first tier national university. More than 3,400 students attend classes on the university’s campus in Newberg, Ore., and at teaching centers in Portland, Salem, and Redmond, Ore., and Boise, Idaho. George Fox offers bachelor’s degrees in more than 40 majors, degree-completion programs for working adults, five seminary degrees, and 11 master’s and doctoral degrees.