Editor and movie-actress Nicole Allmann (35) just updated her ultimate list of the best, trendiest, coolest and most unique restaurants around the world. Together with her network of friends she has carefully selected 7 restaurants per city - 560 in total - for quality, hip-factor and individuality. The iPhone guide book who reached the number 1 position in more than 25 countries of all travel apps just got extended - now featuring 80 cities. Among the new destinations are Venice, Florence, Taipei, Seoul and San Francisco. 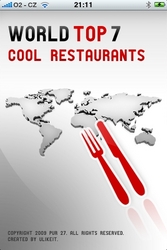 "I like to travel and go to restaurants where locals eat instead of this touristy crap! Just perfect when you are on a business trip"

The new update of this very successful iPhone guide just got better and features even more hidden-gems, fine dining temples but also down-to earth bistro places that only the locals know about.

WORLD TOP 7 Cool Restaurants has re-thought the whole concept of why and how you pick a restaurant – don’t take advice from someone who needs advertisers to pay for their guide. Take it from two independents who can give “take no-prisoners” critiques, avoiding all the marketing spiel and getting straight to the point…what are the best restaurants?

But why only 7 restaurants? Have you found yourself googeling the internet and got stuck in hundreds of restaurant recommendations?

You don’t need more – for a business trip, a weekender or a holiday trip – just the best of each style.