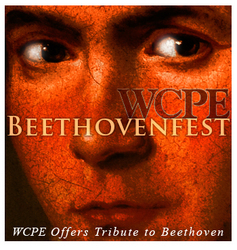 Here is a partial listing of the Festival (the full listing can be found in Quarter Notes):

“Tune in for three days,” he continues. “Let’s celebrate the genius of this great composer!”

The actual date of Beethoven’s birth is not documented, but his infant baptism, also known as a Christening, held at his Catholic parish church was recorded December 17, 1770. It was customary in Catholic countries at that time to baptize infants the day after their birth.

Beethoven is the first composer to earn his living directly from his own work without being subsidized by a church or aristocrat. His piano-playing career ended in 1808 as his deafness became a detriment to his performances. Late in life, Beethoven began incorporating vocals into his musical compositions, laying the foundation for the Romantic Era in music.

WCPE’s live broadcast of Great Classical Music, 24 Hours A Day can be accessed around the globe in several ways; on-line streaming in multiple formats, including IPv6, local cable television systems and traditional radio broadcasting. A complete list of the ways WCPE is available with instructions for cable and satellite reception can be found at: theclassicalstation.org/listen.shtml.

About WCPE:
With a 30 plus year history, WCPE is a non-commercial, 100 percent listener-supported, independent station dedicated to excellence in Great Classical Music, 24 Hours A Day. Community-minded business underwriters and foundations are among the 150,000 listeners in the North Carolina broadcast area. General Manager Deborah S. Proctor’s leadership has enabled the WCPE community to include national and worldwide listeners. Other radio stations and cable television systems can rebroadcast Great Classical Music, 24 Hours A Day. WCPE is one of the first public broadcasters to stream on the Internet. WCPE is heard worldwide on the Internet in multiple formats, including the next generation IPv6. Because WCPE receives no tax-derived support, the station conducts two on-air fundraising campaigns and two major mail-out campaigns per year to raise needed operating funds. Quarter Notes, the WCPE Program Guide, is published four times a year as a means to enhance appreciation and understanding of classical music. It is distributed to station supporters and is also available online here. For more information, visit TheClassicalStation.Org or call 1-800-556-5178.