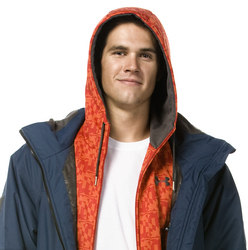 Under Armour (NYSE:UA), the Baltimore-based leader in performance apparel, footwear and accessories, announced today it has re-signed X Games star Bobby Brown to a multi-year endorsement deal. Under the terms of the agreement, Brown, who is the only skier to win two gold medals at the same Winter X Games competition, will be featured in various advertising promotional campaigns and will serve as a key winter sports ambassador for the Brand.

“Bobby Brown is on the cusp of stardom and has accomplished some remarkable feats at a young age,” said Kip Fulks, Senior Vice President, Outdoor and Innovation, Under Armour. “Despite his success, he remains hungry and humble, and he is poised to electrify his fan-base once again at the upcoming Winter X Games – and beyond.”

In his burgeoning career, Brown has already made his mark on the slopes. In 2010, as an 18-year old, Bobby captured gold medals in Ski Slopestyle and Ski Big Air at Winter X Games in Aspen. He continued his dominance taking first place at the Freeski Slopestyle Championships in Mount Snow, VT, and third place at Snow Basin, UT, giving him a second place finish in the overall Freeski Slopestyle standings for the 2010 Winter Dew Tour. As a result of his stellar 2010 season, Bobby was named overall Association of Freeskiing Professionals (AFP) Slopestyle Champion. He is also recognized as the first skier to land the “Switch Double Misty 1440” trick, which earned him the first-ever perfect score in the Ski Big Air Contest at Winter X Games.

“Under Armour has been a staple of mine since I began competing, and I am extremely excited to extend my partnership with them,” said Brown. “Between training and competitions, I spend hours on the mountain, and Under Armour’s technical gear is one of the main reasons I am able to perform at my best.”

Under Armour, the originators of performance apparel, has transitioned athletes into moisture-wicking apparel since 1996. Under Armour products are sold worldwide and worn by athletes at all levels, from youth to professional, on playing fields around the globe.

About Under Armour, Inc.
Under Armour® (NYSE: UA) is a leading developer, marketer, and distributor of branded performance apparel, footwear, and accessories. The Company's products are sold worldwide and worn by athletes at all levels, from youth to professional, on playing fields around the globe. The Under Armour global headquarters is in Baltimore, Maryland, with European headquarters in Amsterdam’s Olympic Stadium, and additional offices in Denver, Hong Kong, Toronto, and Guangzhou, China. For further information, please visit the Company's website at http://www.underarmour.com.