With Christmas right around the corner, the festive spirit has spread through Creative Bube Tube. The office has been decorated with holiday trim; hot chocolate fills mugs throughout the day; freshly-fallen snow adorns the view of downtown Milton. However, nothing has given the CBT team more Christmas cheer than the recent awards they have won. 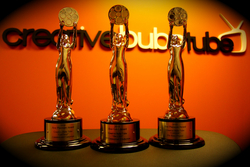 This year, Creative Bube Tube ranked in the top 12% among over 1700 submissions from production companies, web developers, advertising agencies, producers, directors, editors, and cameramen for the 2010 International Ava Awards (Audio/Visual Awards). The Association of Marketing and Communication Professionals (AMCP) presents the awards to creative professionals in recognition for outstanding work in the field of audio visual materials and programs. The Creative Bube Tube team submitted 3 projects produced in 2010 and came away with 3 awards.

The awards stand proudly in the Creative Bube Tube boardroom, a sign of the hard work and dedication the advertising agency puts in every project. The team would like to thank all the clients, cast, and crew members who helped them bring these productions to life and stand out amongst the thousands of competitors who submitted work worldwide. This will surely be a Christmas at Creative Bube Tube which will not be forgotten.