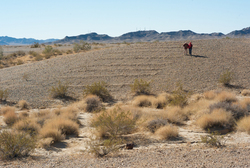 La Cuna de Aztan Sacred Sites Protection Circle founder Alfredo Figueroa guides a visitor at "The Temple" a Native American geoglyph outside Blythe, CA. According to Figueroa, "The Temple" is located on proposed project lands of Blythe Solar, as permitted by the BLM, and is in jeopardy. Photo: Lundahl.

"...now instead of the analysis being focused on is this a cost effective project, is it a project that will eliminate environmental damage, is it a good investment... all of that is secondary to the race to get a 30 percent cash grant."

According to court documents, the projects include the Ivanpah Solar Electric Generating Project (Brightsource Energy), the Blythe Solar Power Project (Chevron Energy Solutions and Solar Millenium, LLC), the Imperial Valley Solar Project (Tessera/NTR), Chevron Energy Solutions Lucerne Valley Solar Project, Calico Solar Project (Tessera/NTR), and the Genesis Project (Florida Power and Light subsidiary NextEra™). La Cuna founder Alfredo Figueroa states that cumulatively, the projects would grade and develop 23,842 acres of essentially pristine desert lands, designated as class "L" under the California Desert Conservation Area Plan. Class L (Limited Use) lands protect "natural, scenic, ecological, and cultural resource values." The lands are "managed to provide for generally lower-intensity, carefully controlled multiple use of resources, while ensuring that sensitive values are not significantly diminished." The complaint indicates that each of the projects was permitted with an "amendment" to the CDCA according to the Bureau of Land Management.

The suit follows the filing of the Quechan tribe's legal challenge to the imperial Valley Solar Project which was granted an injunction by Judge Larry Burns on December 15, Civil Action No. '10CV2241 LAB CAB, United State District Court for the Southern District of California. Robert Lukefahr, CEO of Tessara Solar said at the time, "Tessera Solar is deeply disappointed with the federal court's ruling last night." Company press releases stated on December 9, 2010 (prior to Congress extending the time limits for ARRA, American Reinvestment and Recovery Act 30% project cash grants--at the end of the lame duck session--to December 30, 2011) parent company NTR (National Toll Roads of Ireland) had taken a "write down" of 96 million Euros. The Quechan suit further clouds the issues for investors. Now La Cuna de Aztlan's complaint and request for a Temporary Restraining Order (TRO), giving time for an injunction to be considered by the court, adds another impediment for industrial development of the desert. Following LaCuna's filing, the future of 5 additional projects is in jeopardy.

According to la Cuna de Azlan's Pinon, the pressure of the ARRA "fast track" process approved by Secretary of the Interior Ken Salazar resulted in inadequate Environmental Impact Statements and inadequate government to government consultation with the tribes, under Section 106 of the National Register of Historic Places. Bill Powers of San Diego based Powers Engineering, a prominent energy engineer states, "So the Orwellian aspect of the government involvement in this process is that now instead of the analysis being focused on is this a cost effective project, is it a project that will minimalize or eliminate environmental damage, is it a good investment strategically for this state, all of that is secondary for the race to get the permit so that the project can get a 30 percent cash grant. In this case -- that's $600 million up front per project. So the money is so big that it's now like a bull rush to the finish line."

The potential impacts are both environmental and cultural. Jim Andre, Ph.D. University of California Riverside botanist, and Director of the Sweeney Granite Mountains Desert Research Institute states, “Rather than be smart from the start by utilizing ecologically degraded sites first, a reckless and scientifically unmerited decision has been made to instead race into our most pristine desert and obliterate some of the most botanically significant lands in California.” With over 250 projects in application in California alone, over 2 million acres of desert would be graded if all of the projects now in application were to be approved. Dr. Andre continues, "This scale of an impact has never occurred before. When you consider the importance of these (eco) systems to provide corridors for species to move as climate changes, whether its human caused change, or just the natural course of variation in climate change, you’ve really done in the entire ecosystem at that scale."

At stake also are the region's unique and invaluable cultural resources. According to the testimony of Elizabeth A. Bagwell, Ph.D., RPA and Beverly E. Bastian before the California Energy Commission, " This analysis estimates that more than 800 sites (Cultural Resource Sites--Sacred Sites) within the I-10 corridor, and 17,000 sites within the Southern California Region will be potentially destroyed. La Cuna de Aztlan Sacred Sites Protection Circle has an agreement with the BLM to work together to protect Native American sacred sites and cultural resources.

Airborne dust from grading private land outside Blythe, California, rises from the desert floor. "Desert pavement" normally caps the soils here. It is formed by the gradual removal of sand, dust and other fine grained material by the wind and intermittent rain. Once the pavement has been formed it can act as a barrier to further erosion (Wikipedia). When grading takes place, the desert pavement is scraped away leaving powdery soils which become airborne, affecting air quality. Blythe Solar is a project of Solar Millenium LLC and Chevron Energy Solutions. The companies have proposed to grade 9500 acres at the site. According to the companies, Blythe Solar would be the largest utility scale central-station solar facility in the U.S. Photo: Lundahl.