Using his grandmother's recipe, Delaware North Companies Sportservice Executive Chef Eric Borgia and his staff have made more than 100,000 meatballs this football season fresh in the stadium's kitchens. Fans of the New York Jets and New York Giants have enjoyed the "homemade" meatballs in concessions, clubs and suites at the new stadium. 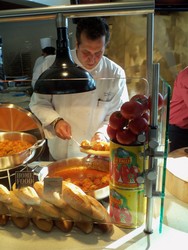 “It’s just like at home,” Borgia said. “You have this group of mothers, all of whom are awesome cooks, hand-rolling these meatballs to perfection."

When it comes to New York-New Jersey foods, it’s hard to look past a good old-fashioned Italian favorite – the meatball. New Meadowlands Stadium Executive Chef Eric Borgia, a native of the region, thought the same thing when developing menu items with a hometown feel for New York Jets and New York Giants fans.

Using his own grandmother’s recipe, Borgia and his Delaware North Companies Sportservice staff have spent the first season at the new stadium in East Rutherford, N.J., making about 5,000 meatballs for each game to serve in concessions and premium areas.

“It’s been meatball fever over here,” Borgia said with a laugh. “We go through almost 1,000 just feeding the stadium staff and for catering.”

During some tastings prior to the season, Borgia’s signature meatball was endorsed not only by Sportservice President Rick Abramson, but also Jets owner Woody Johnson. It’s been a huge success in the pilot year, selling well above expectations. Borgia estimates more than 100,000 meatballs will have been enjoyed in hoagies and separate servings by the time the season ends Sunday.

“Nonna Fusco’s Meatballs,” branded as a tribute to Borgia’s late grandmother, Antoinette Fusco, are made of beef, pork, veal, basil and garlic. A unique touch is that they are hand-rolled with a touch of dry white wine.

Eight members of Borgia’s large culinary staff at the stadium spend time each week preparing the meatballs. He refers to them as the “Meatball Moms.”

“It’s just like at home,” Borgia said. “You have this group of mothers, all of whom are awesome cooks, hand-rolling these meatballs to perfection.”

Although the process of making the meatballs from scratch takes a bit longer than using a prepackaged, ready-to-cook product, Borgia believes the homemade taste and feel is what sells.

“When people walk by one of our kitchens, they see action,” Borgia said. “They like that action, because they know the food is fresh and that we aren’t just throwing frozen meatballs in an oven.”

Borgia is also ready to win over new Jets running back LaDainian Tomlinson. After spending the previous nine seasons in San Diego, the future hall-of-famer told the New York Times in May that he couldn’t wait to try some New York-style Italian food.

“I’m not sure if L.T. (Tomlinson) has tried the meatballs yet or not,” Borgia said. “But I can guarantee they’ll be some of his favorite if he likes a good Italian dish. I’d love to have him try them.”

The meatballs are just one of the regional favorites that have enjoyed success in New Meadowlands Stadium concessions during the stadium’s inaugural season. Among the other “Home Food Advantage” favorites are Taylor ham sandwiches, Italian roast pork sandwiches and pepper and egg sandwiches. Most were recalled by Borgia from his childhood or were scouted by Abramson during several tours of restaurants in the area.

Borgia oversees all culinary operations at New Meadowlands Stadium. Since joining Delaware North in 2002, Borgia has served in various high-level culinary positions, including as executive chef at the San Diego Padres’ PETCO Park, and at the helm of some of the company’s most prestigious events. Borgia is certified by the American Culinary Federation as a chef de cuisine.