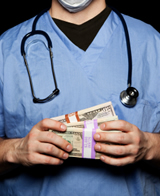 We believe Dr. Schmalzried may have put hundreds of these hips into patients throughout Southern California and never advised any of them that he was receiving millions from the hip's manufacturer. There is simply no excuse for this conduct.

Attorneys from California personal injury and class action law firms Kershaw, Cutter & Ratinoff, and Wexler Wallace LLP, filed suit* this week against Los Angeles orthopedic surgeon, Dr. Thomas Schmalzried, on behalf of one of his patients who was implanted with a DePuy ASR Resurfacing System in 2006. The device was recalled in August 2010, after DePuy received numerous reports that their metal-on-metal hip devices had a high failure rate and were shedding cobalt, chromium and other metallic debris into the hip joints of individuals who received them.

After finding out about the hip replacement recall, the patient discovered that his surgeon, Dr. Schmalzried, who had recommended that the ASR system be implanted in his body, was receiving millions of dollars from DePuy in royalty payments from the sale of these hip devices. The complaint estimates that these payments may exceed $10 million.

"Dr. Schmalzried's conduct is outrageous," stated plaintiff's attorney, Stuart Talley. "When a patient puts their trust in a doctor they expect that doctor to be forthright and honest. This obviously includes advising patients that they have a direct financial interest in the product they are recommending be implanted into the patient's body - and this is especially true when the product is new and has never been approved by the FDA."

Numerous medical journals reveal that metal hip prosthetics containing cobalt have been linked to cobaltism, a condition caused by excessive levels of cobalt in the blood that may contribute to heart failure, hyperthyroidism, deafness, tinnitis, and even cancer. Talley's firm published an online library of such medical journals, along with a video featuring an orthopedic surgeon explaining the dangers of the ASR implant. The surgeon featured in their video states that he refused to use the DePuy device due to insufficient testing and the unknown long term effects of metal toxicity.

Although 93,000 devices worldwide have been recalled by the manufacturer, Schmalzried has maintained that the problem with the hip was mechanical and could be remedied by improved surgical placement. That argument won't cut it for the plaintiff's lawyers, who say the surgeon should have been transparent with his patients about the financial rewards he was receiving from DePuy in the first place.

"We believe Dr. Schmalzried may have put hundreds of these hips into patients throughout Southern California and never advised any of them that he was receiving millions from the hip's manufacturer. There is simply no excuse for this conduct," Talley added.

Kershaw, Cutter & Ratinoff have demonstrated their dedication to protecting the legal rights of patients affected by medical device recalls, as well as their ability to devote substantial resources through trials involving large corporations. Their insurance bad faith attorneys have helped California physicians recover disability insurance bad faith claims, and their class action and personal injury lawyers have represented thousands of victims of defective medical devices, dangerous drugs and consumer products in cases throughout the United States. They have generated millions of dollars in lawsuit recoveries for their clients and the classes they have represented.

To schedule an interview with Mr. Talley, please contact Taryn Smith at 888-290-4472, or email tsmith(at)kcrlegal(dot)com.