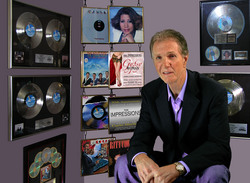 Curtis was going to produce me in 1970 when I was a recording artist. He and the head of Custom Records came to see me perform a show in Chicago. We spent the next afternoon together going over songs. What a treat it was to sit with him as he played and sang songs for me. It was even announced in Record World, which was a popular music magazine at the time.

Cool Pepper Disc's debut project, "The Impressions' 50th Anniversary Salute to Curtis Mayfield", will feature 17 Mayfield-penned hits, including "Keep on Pushin'", "Amen", "People Get Ready", "It's All Right", "Woman's Got Soul", and "Talking About My Baby". An unreleased (neverbefore-heard) version of the 1960s smash "Gypsy Woman" will soon be available for digital download at http://www.jmichaelent.com.

"I worked with The Impressions as an artist and producer in the 1980s," said Michael, who garnered success as a tunesmith and publisher with the hit "Play the Game Tonight" (Kansas) and other cuts by acts such as Pure Prairie League, Aretha Franklin, The Oak Ridge Boys and Shirley Ceasar. "These legends of soul were the first group to bring inspirational messages into the pop market. All of their hits were written by Curtis Mayfield."

Michael noted that he produced and recorded all of the selections on the Mayfield tribute CD. The recordings have been digitally re-mastered and are only available through Cool Pepper Disc in Nashville. The unreleased version of the Mayfield-penned hit "Gypsy Woman", which has sat in a music vault since 1961, features an extended performance by The Impressions. It is available by digital download only.

"When 'Gypsy Woman' was originally recorded, it was too long for radio, so they cut the last verse for airplay," Michael added. "The rest is history. It was a huge hit. Now fans will be able to hear the unreleased version for the very first time."

At age 16, Mayfield quit school, leaving to form a five-piece group called The Roosters. Later, the name would change to The Impressions. The lead singer was Jerry Butler, fellow member of Mayfield’s grandmother’s congregation. In 1958, a year after Mayfield left school, The Impressions scored a national hit with “For Your Precious Love” – one of the songs heralding the emergence of "Chicago Soul of the Sixties". Butler (and his lead voice) went solo after “For Your Precious Love”, leaving most of the responsibilities for The Impressions to Mayfield.

Mayfield was now in charge of a group that had morphed from five to three pieces, a vocal rarity in the R&B/soul field at that time. But he turned it to his advantage, taking over as lead singer and putting together arrangements and harmonies for three voices that worked to set the group apart. As a result, The Impressions became a powerhouse group of the "Soulful Sixties", with a consistent string of chart hits. The group even managed to take a stand against the arrival of The Beatles as chart dominators. When the British Invasion started in 1964, The Impressions racked up no less than five Top 20 hits that year, all crafted and tailored by Mayfield. The legendary songwriter/performer died in 1999 after racking up numerous hits with The Impressions and as a solo artist.

Michael's career spans more than 40 years. He has achieved success as a recording artist for Capitol and Mercury/Smash Records; a music publisher; a songwriter; a record producer; and a studio owner and manager. He also has served as the owner of a booking agency and concert promotion company. His songs have been featured on gold, platinum and/or multi-platinum albums by top recording acts in pop, rock, R&B, country, adult contemporary and gospel, including Aretha Franklin, The Four Tops, Kansas, Pure Prarie League, Paul Overstreet, The Oak Ridge Boys, Rita Coolidge, Dobie Gray, Exile and Shirley Ceasar. As a former member of the popular 10-piece soul band The Entertainers, he performed on concert stages in Las Vegas, Lake Tahoe and top venue circuits across the nation. For many years, he ran a state-of-the-art recording studio called Suite 900 in the United Artists Tower on Nashville's Music Row. His newly founded Cool Pepper Disc record label will spotlight artists in various musical formats.

"It’s ironic how all this come about," Michael said. "Curtis was going to produce me in 1970 when I was a recording artist. He and the head of Custom Records came to see me perform a show in Chicago. We spent the next afternoon together going over songs. What a treat it was to sit with him as he played and sang songs for me. It was even announced in Record World, which was a popular music magazine at the time."

The record label's attorneys had a difference of opinion on the contract, so the artist deal never materialized. Michael ended up taking a position with a different record label in Atlanta.

For more information about the new Cool Pepper Disc CD "The Impressions' 50th Anniversary Salute to Curtis Mayfield" or the unreleased version of "Gypsy Woman", please visit http://www.jmichaelent.com, or call (615) 366-9929.