Racing against time to prevent dehydration and the spread of water-borne diseases from contaminated water, DynGlobal deploys its DG 24/7 water purification systems to Project Hope for disaster relief in Haiti. These self-contained, solar-powered water filtration and purification units will be installed throughout the nation as permanent potable water sources for tens of thousands of needy Haitians. 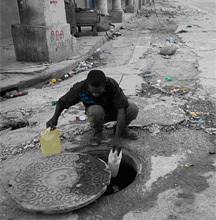 A man resorts to collecting drinking water from a manhole in downtown Port au Prince in post-earthquake Haiti.

In countries like Haiti where access to clean water and other basic resources is a major challenge, having 'green' solutions isn't just a nice feature - it's a necessity.

DynGlobal LLC, a worldwide leader in water purification and renewable energy solutions, has partnered with Project Hope and the Department of Defense (US Navy) on a large scale effort to deploy and install its DG 24/7 solar-powered water filtration systems in key locations throughout devastated Haiti. Powered completely by the energy of the sun, the DG 24/7 units remove deadly heavy metals like arsenic and lead, and provide up to 60,000 liters per unit per day of bacteria, cyst, virus, and pathogen-free potable water using a proprietary filtration system.

“We designed the DG 24/7 specifically for large scale disaster relief and extreme situations such as this,” says A. Vernon Wright, CEO and founder of DynGlobal. “The systems are pallet sized for efficient transport, and can be easily installed and running in the field within about 15 minutes. The self-sufficient units can operate 24 hours a day without the need of grid power or even consistent sun exposure. In countries like Haiti where access to clean water and other basic resources is a major challenge, having ‘green’ solutions isn’t just a nice added feature, it’s a necessity.”

Access to clean water in poverty-stricken Haiti was a major problem even before disaster struck on January 12, 2010. More than half of the nation’s 9 million residents drink from heavily contaminated water sources, causing Haiti to rank dead last in the world’s water poverty index. Haiti also has the highest infant mortality rate in the Western hemisphere due primarily to water-borne illnesses.

Post earthquake, the Red Cross estimates that 6 to 12 million gallons of potable water is needed daily in Haiti to help the 3 million plus people in need. Even with bottled water donations and desalination efforts underway, providing secure, ongoing clean water sources remains a major concern.

“We are very grateful to Project Hope, the United States Navy and the Department of Defense in helping us to get a sustainable, clean water solution to the people in Haiti,” states Wright. “This week DG 24/7 units are being installed at Hôpital Sacré Coeur (Sacred Heart Hospital) in Milot near Cap Haitian, a large refugee camp near Jimani in the Dominican Republic, and at a secure public water source in Port au Prince. We will continue to work closely with everyone involved to provide clean, potable water to everyone in Haiti who needs it,” Wright pledges.

Additional units are currently being considered for locations in Southern Haiti and other disaster relief sites around the world. DynGlobal estimates that the DG 24/7 units currently earmarked for Haiti will provide a permanent clean water solution for tens of thousands of people every day.

ABOUT DYNGLOBAL ENERGY CORPORATION– DynGlobal is a worldwide leader in water purification and renewable energy solutions for the United States and countries around the globe. Its scalable water filtration systems provide the most purified water on the market today, removing heavy metals like arsenic and lead as well as bacteria, cysts, viruses, and pathogens. DynGlobal has partnered with industry-leading suppliers including GE, Dow Chemical, GenPro Energy, Nimbus Water, Suntech, and Trojan Battery to build its systems. The company works closely with governmental agencies, non-profits and NGOs on clean water solutions and aiding disaster relief efforts around the globe. For more information about the company, its solutions and relief efforts, visit http://www.dynglobal.com.