With the family under attack, it is time for them to step up to their calling 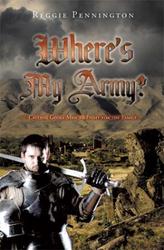 The modern day family is under attack; one does not need to look far in order to see it. The battle began when God blessed the first marriage in the Garden of Eden between Adam and Eve. Ever since then, man’s ordained position as father has been compromised. Although they are all called to be the spiritual defenders of the family, today many men are AWOL. In order to regain the ground lost to the enemy, men must wake up to their God-given charge to stand and fight for their families. Within the pages of author Reggie Pennington’s new Xulon title, Where’s My Army? Calling Godly Men to Fight for the Family ($18.99, paperback, 978-1-60957-297-6), men will learn how to identify their role as a husband, a father, and a leader in their community. This book—which is the result of hours of searching the Scriptures, prayer, and bringing that search into focus for a message the world is in a desperate need to hear—will resonate with men who feel as though they are being distracted from their godly assigned duties and responsibilities to their family.

“Men will recognize God was not wasting His time when He planned and created each of us to be warriors in His army,” the author says. “Once we embrace His call upon each of us, the training process begins. He will equip and provide all that we need, enabling us to be strong and bold.”

Pennington says that he is no theologian; he is one man who has a heart for God and is trying to make sense of what is happening in this world as it relates to his faith. He has searched the heart of God for an understanding of what it means to be a warrior in God’s army. Through many personal trials and challenges to his faith, he has decided it is time somebody stepped forward and put into plain English the truth of Scripture intended for all of God’s people.

Xulon Press, a division of Salem Communications, is the world’s largest Christian publisher, with more than 7,300 titles published to date. Retailers may order Where’s My Army? through Ingram Book Company and/or Spring Arbor Book Distributors. Where’s My Army? is available online through xulonpress.com/bookstore, amazon.com, and barnesandnoble.com.