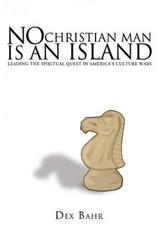 No Christian Man Is an Island

I hope readers, when they finish the book, will have a better understanding of the immoral spiritual and ideological forces in opposition to God and America

Truth is under assault in America, causing her to weaken from within. In Dex Bahr’s new release, No Christian Man Is an Island ($16.99, paperback, 978-1-60957-360-7; $26.99, hardcover, 978-1-60957-361-4), the Xulon author argues that at no time in history is it more crucial for Christian men to have the courage to be knights in defense of God, country, and family than it is now. The book, which encourages Christian men to take an active and passionate stand for truth, reveals to readers the hostile spiritual and ideological forces that have hijacked faith, education, politics, and media and why they must be defeated.

“I hope readers, when they finish the book, will have a better understanding of the immoral spiritual and ideological forces in opposition to God and America,” the author says. “I believe most Christians understand that something is terribly wrong with America, but they are unable to articulate specifically what. This book will help Christians to better understand the enemy so they can pray more effective and strategic prayers and mount a more efficient resistance.”

Bahr, a former broadcast news reporter and a Christian man who loves God and cherishes America, became a Christian in 1980. Ever since then, he has served the Lord as a lay speaker and small group leader. It is his hope that his book will serve as a clarion call to the millions of people mired in the current spiritual, moral, and political predicament America finds herself in.