There are only small number of customers who venture away from the most commonly ordered Asian dishes at Kung Fu Plaza Restaurant in Las Vegas, and most of those patrons are visiting from Asia. 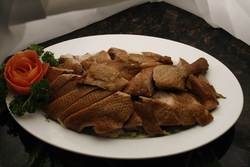 One such receipt that most Americans would consider “off the beaten path” is Kung Fu Plaza Roast Duck. While most citizens are already familiar with Peking Duck, a famous duck dish that originated in Beijing during the imperial era, there is another recipe served daily that has humbler and more ancient origins.

“The Kung Fu Plaza Roast Duck recipe comes from a small valley in China, where the people still speak Teochew (Chaozhou hua in Mandarin),” said Allen Wong, general manger of Las Vegas Chinese Food. “Even some of their language retains archaic promotions that have been lost to modern dialects. The cuisine, Chiuchow or Teochew as it is called, relies much less on heavy seasoning and more on the quality of the ingredients, which is why we only purchase Maple Leaf Farm Premium duck.”

According to Wong, while Teochew people later migrated from southern Fujian in China, they settled from areas that were geographically isolated and remote. Many of the Teochew ancestry can be traced back to the Taihang Mountain range of north-central china, he said.

“It’s significant because just like not all Asian people are the same, neither are all Chinese people,” said Wong. “The culture is as rich and diverse as the United States and the cuisine is a varied as you might expect traveling from Boston to Biloxi and Santa Fe to San Francisco.”

Attempting to appeal to authentic preference of Asian visitors in Las Vegas, Kung Fu Plaza maintains a menu that includes almost 800 dishes, predominantly from China and Thailand. The menu selection, Wong says, represents one of the most expansive Chinese Food and Thai Food menus in the region.

To review a complete menu, visit http://www.kungfuplaza.com. Kung Fu Plaza delivers within a three-mile radius and is located at 3505 S. Valley View Boulevard, which is just east of the Fashion Show Mall on the Las Vegas Strip. For reservations, call 702-247-4120.

Founded in 1973, Kung Fu Plaza is the oldest and most authentic Chinese and Thai restaurant in Las Vegas. It is open daily from 11 a.m. to 11 p.m. The average entree is under $10 and most patrons order family style.