Barbara A. Marlowe, Marketing & Public Relations Director for Dworken & Bernstein Co., L.P.A.,Painesville/Cleveland Ohio receives American Red Cross of Greater Cleveland 2010 Hero Award. The American Red Cross of Greater Cleveland recognized five finalists with its 2010 Hero Award at the Renaissance Cleveland Hotel on Public Square. One-hundred people were nominated by the public for their efforts to save or improve the lives of others. Twenty-five finalists were chosen, from which five winners were selected to receive The People’s Choice award. Mrs. Marlowe won in the Life Saver category. 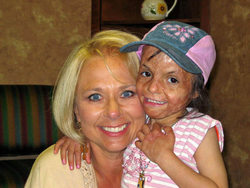 Teeba is truly the hero – my hero, she is so brave and never complains.

People from all over the greater Cleveland area submitted the nominations from which the honorees were chosen. Twenty-five finalists were called to the stage to be recognized, each with their own remarkable story to tell.

On July 16, 2006, Barbara began an epic adventure to bring Teeba Furat Fadhil, a severely burned 5-year old girl from Iraq to the United States for medical treatment. When Teeba was 19 months old, she sustained severe burns to her face, head and hands when an insurgent bomb tore through the back of a taxi that she was in with her 3-year old brother and father. Her brother Youseff was killed and her father sustained minor injuries. One year to the day of first reading about her in the paper, Teeba arrived. She is currently undergoing a series of tissue expansions at University Hospital’s Rainbow Babies & Children’s Hospital in Cleveland and has just recovered from her 14th surgery in three years. Cleveland, Ohio based Wigs for Kids is providing her with wigs. ‘I fell in love with her the moment she got off the plane' comments Barbara. “Teeba is truly the hero – my hero, she is so brave and never complains.”

Barbara has had many years of philanthropic service in her career and is actively involved in an initiative of Dworken & Bernstein Co. L.P.A called Ohio Lawyers Give Back. Ohio Lawyers Give Back is a non-profit used to promote the use of an ancient doctrine called cy pres. This doctrine allows for all unclaimed class action funds to be distributed to charity. Mrs. Marlowe has also been lobbying for legislation with Dworken & Bernstein Co., L.P.A. partner, Patrick J. Perotti to make this doctrine mandatory in the state. There is approximately $60 Million Dollars each and every year that could be available to charities throughout the state of Ohio.

Ohio Lawyers Give Back