Sex Toy of the Year is Lelo NEA

BetterSex.com has awarded Lelo's NEA it's Sex Toy of the Year Award for 2009. BetterSex.com considers product quality, innovation and reviews from its Better Sex Buzz Team along with a products sales. 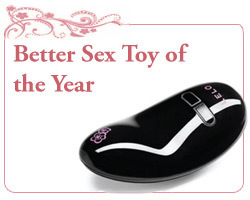 BetterSex.com crowns the Lelo NEA Sex Toy of the Year. The NEA is a beautiful combination of form and function, made of surgical-grade elastomer plastic suitable for water, silicone or oil lubricants. The Lelo Nea is ergonomicly artful with floral motifs. The NEA hums quietly, but don't let its small size fool you; the buttons above it's logo adjust vibrations among five different levels, the fifth being surprisingly strong. One of the best features is it's eco-friendly (rechargeable). From a full charge, the Lelo Nea provides 7 hours of pleasure.

Lelo, A Sweedish company based in Stockholm, says it best, "We blend fashion, femininity, engineering and design to create objects not just functional, but seductive in their own right. Lust objectified to inspire a positive and confident sexuality." Lelo is looking at raising the bar again this year with the Lelo BO product.

Lelo's Nea packaging is beautiful, simple and familiar. When you first look at NEA's box, you think that it could be hide an expensive watch or jewelry. Once opened, you see the NEA, instructions, charger and a satin storage bag.

Rounding out the Top 10 Sex Toys of the Year at BetterSex.com:

#2 We-Vibe
Last year's selection as the BetterSex.com Sex Toy of the Year, We-Vibe is sleek and sexy offering a new dimension in intimate pleasure. The We-Vibe is a hands-free dual simultaneous G spot and clitoral stimulator, AND a revolutionary design that can be worn DURING intercourse. We-Vibe established a new sex toy category and was recently given to celebrities at the Oscars providing more proof adult sex toys are going mainstream. We-Vibe was also Viewer's Choice Toy of the Year on Talk Sex with Sue Johanson in 2008.

#6 Vacurect OTC Penis Pump
80,000,000 baby boomers all heading toward longer life spans and a desire to redefine what it means to "retire" is creating a substantial market in erection aids such as the Vacurect OTC pump. Vacurect helps a man achieve and maintain an erection without taking drugs.

All of the Sex Toys of the Year are available at the BetterSex.com website.