YourSecretGift.com Announces its First Annual Lump of Coal Award Calling out the Naughtiest Person of 2010 - Vote on the Website 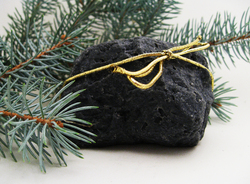 Someone will be awarded a lump of coal for this year's most egregious behavior.

To highlight the year’s most egregious behavior, Your Secret Gift is taking nominations for its first annual 2010 Lump of Coal Award.

To highlight the year’s most egregious behavior, Your Secret Gift is taking nominations for its first annual 2010 Lump of Coal Award on its website. As Christmas approaches and the year draws to a close, there's been no shortage of news stories about misbehavior. Politicians, Wall Street bankers, company executives, celebrities, exes, and many others have behaved badly, and such lapses and improprieties haven't gone unnoticed by the American people.

Anyone can submit a nomination for America's Naughtiest Person of 2010 at Your Secret Gift's Annual Lump of Coal Award webpage. The individual receiving the highest number of votes will be recognized with a lump of coal for his or her dubious achievement. First and second runner-ups will also be acknowledged. Nominations will be accepted through December 15, and the award winners will be announced publicly on the award webpage as well as Your Secret Gift’s Facebook page and Twitter feed on December 17, 2010.

Site visitors who can't wait for the voting results can be their own Secret Santas and send a lump of coal (coal-shaped soap handcast from molds made from real lumps of coal) as an anonymous gift to the person of their choice. "Santa's Lump of Coal" is packaged in a red satin pouch with a holiday gift tag that reads "You've Been Naughty..."

About Your Secret Gift
Your Secret Gift LLC, (found at yoursecretgift (dot) com), offers fun ways to send gifts to flirt, provide support and encouragement, make someone laugh, play pranks, send a bad boss a wake-up call, razz a sports team rival, and more. Your Secret Gift has Christmas gifts, holiday gifts, birthday gifts, Valentine's Day gifts, gifts for her, gifts for him and special occasion gifts. Items can be sent anonymously, non-anonymously or shipped to oneself. Your Secret Gift is located in Colorado and cheerfully serves customers across the United States.

Someone will be recognized with a lump of coal for this year's most egregious behavior.

Santa's Lump of Coal at www.yoursecretgift.com