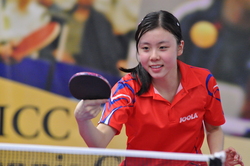 At just 15 years old, Ariel Hsing has taken the table tennis world by storm. Hsing has accomplished more in her table tennis career than others will in an entire lifetime and her extensive list of titles is gaining international attention. As a member of the 2010 USA Women’s, Junior, and Cadet Girls National Team, Ariel has represented her country most impressively, winning numerous titles. On the homefront, Hsing recently competed in the 2010 U.S. Nationals and became the youngest U.S. National Women’s Champion in the history of USA table tennis, defeating fellow teammate Lily Zhang, 14, for the championship title. Hsing is currently ranked no. 8 in the world for 15 and Under Girls.

Producing consistent and successful results since 2003, Hsing is still on her way up. With the trials for the 2011 Pan American Games right around the corner, Ariel isn’t letting her latest victory at the US National Championships distract her from her next goals. “I’m playing well right now. I hope to make the US Team for the 2011 Pan Am Games, but my focus is to be part of the US Team at the 2012 London Summer Olympic Games,” says Hsing.

During most of the year, Hsing resides in San Jose, California with her parents and trains in one of the nation’s most recognized table tennis programs, created and housed at the India Community Center (ICC) in Milpitas, CA. Program Director Rajul Sheth comments, “Ariel is one of the hardest working athletes I have ever worked with. She has made us very proud with her performance at the US National Championships!”

Hsing’s talent has also caught the attention of JOOLA, one of the world’s leading table tennis brands. “It’s extremely exciting to see some real talent come out of the US. The sport is so advanced overseas and it’s very refreshing to see a young American with the potential to make the 2012 London Olympics and give Team USA a chance on the international level. We couldn’t be happier to have Ariel join Team JOOLA,” states Richard Lee, CEO of JOOLA North America.“