RV News Net launches January 15 with 12 recreational vehicle oriented TV shows distributed over the internet. In addition to traditional website and podcast distribution, RVNN’s shows will be delivered via “over-the-top” internet tv systems such as Roku and Boxee. The network will will offer a broad range of RVing and RV-related content at RVNN.tv. 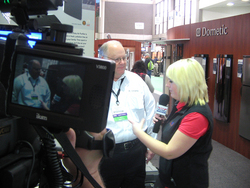 On January 15, RV News Net (RVNN.tv) launches with 12 recreational vehicle oriented TV shows distributed over the internet. In addition to traditional website and podcast distribution, RVNN’s shows will be delivered via “over-the-top” internet tv systems such as Roku and Boxee.

RVNN will be advertiser-supported, offering viewers a broad range of RVing and RV-related content, largely in a breezy, informal style.

According to Andy McCaskey, Managing Director of the network, “RVNN is casual TV, not highly produced, but the trade-off is a closer relationship with our audience, more immediacy and a higher level of involvement that translates into a more productive marketing channel for advertisers. ”

“It’s a first in the RV industry, “ McCaskey continued. “A multi-layered marketing channel that is actually ‘two –way TV’ using familiar tools such as text messaging and Skype, and it’s fully integrated with social media such as Twitter and Facebook. With RV News Net, marketers can reach audiences more pro-actively, in ways people want to be reached. RV News Net is an exciting cost-effective communications channel to reach the RV enthusiast.”

RVNN.tv programs are produced at the network’s studio in Elkhart, using both local talent and guests, many of whom will join the shows via Skype.

Shows in the initial 13-week run will include:

"Ask The Professor" -- The Texas RV Professor Terry Cooper provides a weekly call in show on every facet of do-it-yourself RV maintenance.

"Tails from the Road" -- Veterinarian Dr. Jill Windy shows RVers how to keep their furry four-footed traveling companions healthy and safe at home as well as on the road.

"What’s Wrong with This Picture?" -- Professional photographer Dennis Guillaume focuses on how to make and organize better photos of RVing adventures.

"Show Spot" -- An interview series recorded at industry and lifestyle trade shows and rallies, such as the RVIA Louisville show and other events.

"Close Up" -- A product-focused show including unit walk arounds and inside interviews as well.

"RVing for Good" -- Delbert and Linda Shrock use their fifth-wheel as a base camp for field Mission Work at sites around the country – keeping them involved in meaningful, active lifestyle in retirement.

"RV Kitchen" -- Award winning author Evada Cooper’s insight into the Home Economics of running a full time household and kitchen from an RV.

“Most of our shows are geared toward discovering and enjoying the fun and adventure aspects of RVing,” said Dave Dufour, RVNN’s Creative Director and co-host of several network shows. “We want to be evangelists for the RV lifestyle, and build a community of viewers who contribute as much to the network as they get from it.”