TAG Oil Ltd. (TSX-V: TAO) reported today that ongoing production testing of the 100%-controlled Cheal-BH-1 horizontal well in the Taranaki Basin of New Zealand continues with positive results. They also announced that significant progress is being made towards fast-tracking the commercialization of the Sidewinder-1 oil and gas discovery. 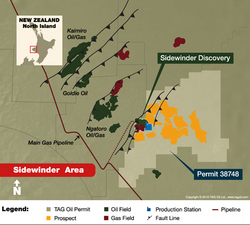 TAG Oil’s Chief Executive Officer, Garth Johnson commented, “With hundreds of meters of high quality oil and gas pay across the horizontal section in the Cheal-BH-1 well, and the strong flowing pressures we’ve measured during testing, we can anticipate rapid capital recovery and long term profitability from this well. With further potential to increase the flow rate, this promising result — from the first-ever horizontal well drilled into the Mt. Messenger Formation — will allow us to capture more reserves, providing a positive impact in our approach to the future development of Cheal.”

The current production output capabilities at the Cheal field from the wells that are permanently or temporarily tied into the Cheal Production Facility, now exceed 1,000 BOE per day. More information on the Cheal Oil Field discoveries in the Taranaki Basin can be found on TAG’s website at http://tagoil.com/cheal-oil-field.asp.

Sidewinder Oil and Gas Discovery
TAG Oil also announced that significant progress is being made towards fast-tracking the commercialization of the Sidewinder-1 oil and gas discovery. Development of the new Sidewinder Production Station, including a 3-km pipeline link into New Zealand’s main gas transmission grid, is being designed to accommodate oil and gas production from all future Sidewinder wells.

“The high deliverability test results from the Sidewinder-1 well combined with strong gas prices in New Zealand, provide compelling economics, with drilling and development costs potentially recoverable in under six months.” Mr. Johnson commented. “With this new facility in place, we can commercialize additional Sidewinder wells quickly and cost effectively.”

TAG’s present timeline forecasts facility commissioning, with estimated initial production rates from the Sidewinder-1 well of 8 to10 million cubic feet of gas per day (1300 to 1600 barrels of oil equivalent per day), by mid-2011. “Together with Sidewinder and production from Cheal, TAG’s daily production will increase substantially by the end of fiscal Q2, 2011.” Mr. Johnson noted. “Also, successes arising from our current and planned 2011 Taranaki Basin drilling campaign would drive additional production and reserve growth in 2011.”

More information on TAG Oil’s Sidewinder discovery can be found on our website at http://tagoil.com/20101103-TAG-Oil-Announces-Strong-Results-at-Sidewinder-1-Flow-T.asp.

TAG Oil Ltd.
TAG Oil Ltd. is a Canadian-listed company (TSX-V: TAO) with operations in New Zealand. With 100% control over all its core assets, including oil and gas production infrastructure, TAG is anticipating production growth through development of multiple oil and gas discoveries in the Taranaki Basin. TAG is also targeting high-impact drilling opportunities on numerous exploration prospects identified over 3,500 sections of land onshore.

In the East Coast Basin, TAG is pursuing the major unconventional resource potential that has been demonstrated in the Waipawa Black Shale and Whangai Shale source-rock formations. These oil-rich, naturally fractured formations compare favorably to fractured shale formations such as the Bakken Shale in the Williston Basin.

“BOE”s may be misleading, particularly if used in isolation. A BOE conversion ratio of 6Mcf: 1 Bbl is based on an energy equivalency conversion method primarily applicable at the burner tip and does not represent a value equivalency at the wellhead.

Cautionary Note Regarding Forward-Looking Statements
Statements contained in this news release that are not historical facts are forward-looking statements that involve various risks and uncertainty affecting the business of TAG Oil. These statements are based on certain factors and assumptions including those related to the exploration, development and daily production rates of TAG Oil's Cheal oil field and Sidewinder discovery in the Taranaki Basin of New Zealand. Actual results may vary materially from the information provided in this release and there is no representation by TAG Oil that actual results realized in the future would be the same in whole or in part as those presented herein.

Factors that could cause actual results to differ from those contained in the forward-looking statements are set forth in, but are not limited to, filings that the Company and its independent evaluator have made, including the Company's most recent reports in Canada under National
Instrument 51-101.