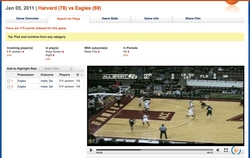 A complex search from the Harvard - Boston College game shows every time 'Reggie Jackson drove to the right using a screen and made a shot in the second half'.

High school coaches on the other hand, work full time jobs and spend their nights and weekends breaking down film because they love the game and their kids. Krossover is going to make sure that the playing field is level..

More than a hundred basketball coaches around the country have had a little more time to spend with their families this winter. They are part of a pilot program launched by Krossover, which has completely changed the way these coaches look at game preparation. The company’s new online video and analytics platform allows coaches to simply upload film after a game, and come back 24 hours later to find it completely broken down and indexed to levels that have stat geeks going crazy. The coaches and athletes can then access the plethora of data and videos from the comfort of their computers at home.

Vasu Kulkarni, a former JV basketball player at the University of Pennsylvania, and CEO of Krossover weighed in on why the company is building these sophisticated tools, “Professional sports teams have it easy. They have the money, the resources, and the manpower to do in-depth analysis for their team, and to scout out their opponents. High school coaches on the other hand, work full time jobs and spend their nights and weekends breaking down film because they love the game and their kids. Krossover is going to make sure that the playing field is level when it comes to game analysis by making the data and footage available in a way that is easily consumed. Then it’s up to the coaches and players to see who makes the most use of the data, given that they have the same tools.”

The pilot program has been a great success thus far, with over 100,000 indexed videos available online after just 2 months of play. Over 1000 athletes have been tagged in the videos, and more than 1,000,000 data points are available for analysis. With about 200,000 sports teams in the country, the possibilities are enormous. James Brown, a veteran coach at a division three college that is taking part in the program said, “The more we get into their product the more we see the usefulness of such an untapped resource of information. I cannot wait for a year from now, when we have had a season under our belts to really explore the endless possibilities of this product. The affordability, coupled with the wealth of information, makes this product a bargain, and a must have for every coach who wants his team to play at the next level.”

The basketball platform has given high school and college athletes the ability to look at analytics that are granular even for NBA games. Information such as "assist distribution by location (near the rim, in the paint, mid-range)", "and-one percentage", and "effective field goal percentage", are just some of the hundred plus individual and team level statistics that are generated after every game. Krossover is taking the success of the basketball platform and extending it to lacrosse, which will launch this spring. Spots are still open for teams to join the pilot program for lacrosse.

With all the hype surrounding the use of statistics in sports, and the evolution of players who are not just gifted physically, but cerebral in their approach, Krossover strongly feels that athletes need to understand the numbers early in their careers. As the superstars of the future start adjusting their game in real time based on statistics, Krossover will be at the forefront of the revolution.

Vasu Kulkarni, CEO and One of Business Week's 2010 Top 25 Entrepreneurs Under 25

Krossover In Business Week - Top 25 Under 25