It is an introduction of Ten-Chi Cha (TEN-CHI CHUH), literally translated from Japanese as "Heaven and Earth Tea," is one of the most traditional Japanese herbal teas. It is unsweetened, caffeine free tea that consists of 12 premium Japanese herbs known for providing "natural detoxification" Now it's available in the U.S. 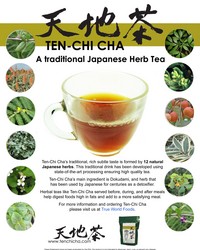 The average person has up to 20 pounds of wasteful toxins clinging to the colon; however, Ten-Chi Cha’s natural herbal blend can get rid of these toxins, resulting in a near instantaneous weight loss. The change is that noticeable.

ECO VITA is pleased to announce Ten-Chi Cha, a Japanese herbal tea designed for optimum detoxification. Literally translated, it means "Heaven and Earth Tea," and incorporates a blend of 12 ancient Japanese herbs used for centuries to rid the body of toxins and impurities.

Are you feeling sluggish? It could be because you have various impurities in your body. An herbal tea like Ten-Chi Cha can be considered a natural laxative of sorts. Drinking herbal tea is beneficial for your health because it eliminates leftover waste from the colon, removes toxins and improves your overall health. The average person has up to 20 pounds of wasteful toxins clinging to the colon; however, Ten-Chi Cha's natural herbal blend can get rid of these toxins, resulting in a near instantaneous weight loss. The change is that noticeable.

The twelve herbs found in Ten-Chi Cha each contribute its own special approach to healing and detoxification. Loquat leaf is rich in several essential vitamins and fiber, which helps improve digestion; Mulberry leaf increases antioxidant production, which has an anti-aging effect on the body; sicklepod is another fiber-rich herb that improves digestive function; lindera leaf is often used to reverse the affects of respiratory problems; and Doku-Dami, a jack-of-all-trades type of healing herb in Japan, removes free radicals from food. "Doku-dami" literally means "poison blocker" in Japanese, which tells you how well-regarded the herb is in Japan. That is only 5 of the ingredients listed in Ten-Chi Cha; there are seven more useful herbs included that also help improve health and detoxify the body.

Think of all the types of teas which have individual health benefits. Green tea is one of the more popular detoxification teas out there, and its benefits are well documented. It is often used as a colon cleanser on its own. Chamomile tea has a general calming effect on the drinker, and is a great way to find relief after a stressful day. Peppermint and fennel tea can relieve nausea symptoms. Tea can also be used as a dietary supplement by reducing hunger cravings and making you feel fuller faster. As stated before, all of these tea recipes have great benefits all by themselves, but there is not a single tea that can provide several of the benefits found in these teas; an all-purpose tea, if you will.

There are several different herbal recipes out there, but Ten-Chi Cha attempts to take the best herbs used in these recipes and blend them together into a tea that is not only great tasting, but great for your body as well. Herbal tea is one of the most effective natural methods to eliminating excess waste. ECO VITA recognizes this, and searched all over Japan for the right blend of herbs to create Ten-Chi Cha. The product, produced in Japan, is specially brewed by roasting each herb individually. Ten-Chi Cha also has no calories, sugar or caffeine.

If you would like more information on how you can buy Ten-Chi Cha Japanese herbal detox tea by ECO VITA, visit the website at http://www.tenchicha.com or contact ECO VITA at 1877-343-6534 or email at info(at)ecovitausa(dot)com.

TEN CHI CHA - Herbal DetoxTEN-CHI CHA is caffeine free and contains zero sugar and zero calories, so you can add it to you diet without any worry about side effects!