“The Way It Really Happened” by God Out Next Week 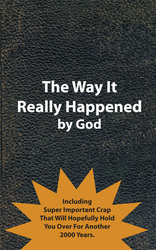 ...set for release on Tuesday, January 18, coinciding with no particular anniversaries of significance or symbolic value...

The new book from the bestselling author of “The Holy Bible” is set for release on Tuesday, January 18, coinciding with no particular anniversaries of significance or symbolic value. The book will be available for Kindle e-book readers, the Barnes & Noble Nook series of readers for $9.99, as well as in traditional trade paperback form on Amazon.com and wherever else one traditionally goes to find a traditional trade paperback. The physical book MSRP has been set at $21.99.

A list of Chapters has been released, revealing that the content of “The Way It Really Happened” is focused both on history and modern day culture. Topics include Catholicism, Mormons, Chinese people, the gays, stuff God hates, and many others including a chapter entitled “Santa Claus, Global Warming, and Faeries” which no doubt exposes the previously disregarded authenticity of jolly ol’ St. Nick and faeries.

The Author has not ruled out scheduling in-person book signings at popular retail outlets, remarking only that they would have to be “low-key” events.