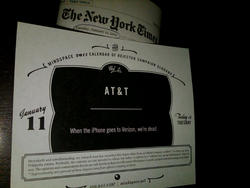 Mindspace successfully predicts the Verizon Wireless’ announcement of its deal with Apple on 1/11/11.

I will neither confirm nor deny the allegation that the Mindspace agency possesses clairvoyant abilities, and that’s primarily because we have no one here named Claire,” says Darren Steele, Mindspace’s principal + strategic director.

Mindspace, a full-service advertising, public relations and new media agency has successfully predicted the Verizon Wireless’ announcement of its deal with Apple, which would allow Verizon to offer the iPhone 4 on its network.

The 2011 Mindspace Calendar of Rejected Campaign Slogans uses “AT&T: When the iPhone goes to Verizon, we’re dead” for its Tuesday, January 11 rejected slogan. Apple COO Tim Cook and Verizon President Lowell McAdam announced the launch of a Verizon-friendly iPhone on Tuesday, January 11 at an exclusive press event at 8AM PST / 11AM EST. The calendar—which won a National ADDY Award for its inaugural 2010 edition—was written and produced during November of last year.

What was supposed to be a fun, creative side project ended up rankling locals and officials alike. Along with today’s uncanny coincidence came an icecubestorm of questions for Darren Steele, Mindspace’s principal + strategic director, and Jason Meyers, public relations director—who have both been fielding questions from suspicious clients and suspicious national investigatory bodies, including the National Institute for Clairvoyant Events (NICE).

“I will neither confirm nor deny the allegation that the Mindspace agency possesses clairvoyant abilities, and that’s primarily because we have no one here named Claire,” says Darren Steele, Mindspace’s principal + strategic director. “Though I will say that tomorrow’s rejected slogan is ‘Las Vegas: What happened is, your money stayed in Vegas,’ which is a terrible harbinger of doom for technoratis attending the 2011 International CES conference in Las Vegas. Don’t bet on the numbers M, I, N, D, S, P, A, C and E. That is all.”

Meyers adds, “There is another dimension beyond that which is known to PR. It is a dimension as vast as Facebook and timeless as Twitter. This is the dimension of Mindspace. A dimension not only of SEO but of media relations. A journey into a wondrous land whose boundaries are that of the Internet. We applaud our PR and creative teams for making this prediction a reality.”

Is the Mindspace Calendar of Rejected Campaign Slogans indeed clairvoyant? The National Institute for Clairvoyant Events (NICE) is currently conducting an investigation into the agency’s published materials—past, present and future—to determine whether the agency possesses any true predictive powers. According to Argyle Suetter, president of NICE, “Our SBB (Spoon Bending Babies) lab has given us considerable data to indicate that the Mindspace agency will indeed survive 2012, and we have yet to receive the same data about any other agency in the Tempe-Phoenix-Scottsdale tri-city area. There is genuine reason for alarm.”

About Mindspace
In business since 2002, Mindspace has experienced tremendous growth every year since it hung out its shingle, in terms of both revenues and clients. Extremely strategic, highly creative and just a little bit left of quirky, Mindspace goes beyond pretty pictures and clever copy to actually understand clients’ business objectives and challenges so that it can deliver highly effective and integrated solutions. With business-to-business and business-to-consumer customers on both coasts, and in-between, this highly decorated, award-winning agency is building a loyal following of clients and employees. For more information, please call 480.941.8497 or visit http://www.mindspace.net.