Bluemile has the largest carrier neutral fiber footprint in Central Ohio, three times that of the closest alternative. 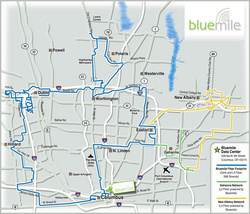 “We’ve created a Central Ohio smart grid for dark and lit services in the carrier, enterprise and municipal communities. It is a natural extension of our business model to provide enhanced value at reduced expense to our existing and future client base."

Bluemile, which has offices in New Albany OH, Columbus OH and Rochester NY, is an established provider of cloud, fiber, colocation and wholesale voice solutions that power companies and service providers worldwide. A new fiber initiative with Columbus FiberNet (CFN), financed by Fifth Third Bank, reduces cost and increases choice for businesses in and around Columbus. Bluemile’s purchase of conduit from CFN and lease of conduit from Dublink Development Company, LLC will enable them to install a 288 strand fiber optic cable creating a new fiber footprint for the region (see attached map).

The Bluemile fiber footprint provides carrier neutral access to service providers over an enterprise grade fiber optic network, built in a ring around central Ohio. The acquisition and lease of CFN and Dublink Development will add approximately 95 miles of open access fiber infrastructure to the existing Bluemile fiber footprint in New Albany and Gahanna. The addition connects the downtown commercial business district with the high tech business parks in Dublin, Worthington, Westerville, Polaris, Easton, and Hilliard.

“We’ve created a Central Ohio smart grid for dark and lit services in the carrier, enterprise and municipal communities,” stated Jamie Busic, CEO and co-founder of Bluemile. “It is a natural extension of our business model to provide enhanced value at reduced expense to our existing and future client base."

“We are very excited to work with Bluemile in the expansion of their network. This is the largest one-time fiber installation we have completed between CFN and Dublink Development, and it will greatly increase the amount of available fiber in the region,” stated Ian Smith, General Manager of CFN and Dublink Development. “We built CFN as an open access conduit system to help foster competitive broadband access for central Ohio. This project fits our vision perfectly.”

Bluemile’s broadband network provides the backbone for higher learning, technological innovation, and economic development, which in turn creates a high-tech community, a smart place to live, learn and do business. The fiber network gives companies the option of choosing from over 180 different service providers that extend across the United States. The Bluemile fiber footprint is an asset for the region, which assists both private and public sectors in developing job growth.

“We have a vision for a greater central Ohio,” stated Michael Marlowe, President and co-founder of Bluemile. “We view broadband as the new utility, one that will further define the haves and have not’s. We are excited to offer both dark and lit services to the carrier community, large enterprise and municipal leadership of Central Ohio.”

Bluemile owns and operates a highly redundant data center with an enterprise cloud infrastructure powered by VCE, EMC, VMware, Dell and other Tier I technology providers. Organizations accessing the Bluemile fiber footprint will be on-net for all Bluemile cloud computing solutions, including Compute, Storage and Backup. Scalable VPS and Dedicated Servers are also available, along with Hosted Voice, Hosted Exchange and Virtual Desktops.

“Our fiber allows customers to save money and access our datacenters and bCloud™ products with unlimited bandwidth and ultra low latency,” stated John McKenna, Vice President of Enterprise Sales for Bluemile. “This allows clients to run their internal applications and web applications as if they were in their own datacenters.”

Fifth Third Bank, member FDIC, is a U.S. regional banking corporation with $112 billion in assets that operates 16 affiliates with 1,311 full-service Banking Centers, including 103 Bank Mart locations open seven days a week inside select grocery stores and 2,433 ATMs in 12 states. Fifth Third is among the largest money managers in the Midwest.

In June 2010, Web Host Directory USA awarded Bluemile as one of the most popular web host providers in the United States. In August 2010, Inc. Magazine ranked Bluemile #599 on the Inc. 500/5000, an exclusive ranking of the nation’s fastest-growing private companies. In December 2010, Bluemile was ranked #87 on the Lead411 Technology 500 Awards list, placing them 3rd in the state of Ohio.