Newport Beach, CA fisherman Jon Apothaker is facing a court case and criminal charges after reeling in a giant black sea bass-- a protected species in California. Not knowing of the protected status of the species, Apothaker brought the fish to shore, but quickly worked to get the fish back into the water and back to freedom. Unfortunately, the fish later expired and animal rights groups began to speak out. Apothaker now must go to court to prove that he did all that he could to release the giant sea bass as quickly as possible. He is being defended pro-bono by Long Beach criminal defense attorney Christopher J. McCann. 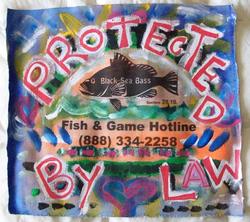 Jon Apothaker now sells artwork to raise awareness and money for the protection of the Black Sea Bass.

Hopefully this case will raise awareness about the protected status of the black sea bass.

On January 3 of last year, Jon Apothaker reeled in more than the catch of the day while fishing off of Balboa Pier in Newport Beach, California. Apothaker pulled in a rare “giant black sea bass,” and hooked himself a number of legal troubles in the process.

This was the first encounter that Apothaker, an avid fisherman, has had with a giant black sea bass. The fish was so strong that it broke Apothaker’s line, leading a number of those standing by to come to the fisherman’s aide.

What did not aide Apothaker is that the giant black sea bass is a protected species in the State of California. While it is illegal to intentionally capture a giant black sea bass, the “incidental” or accidental catching of one--and releasing it--is not illegal according to the law, if it is done “immediately.”

After catching the fish, Apothaker worked to free the fish and reintroduce it to the water. Despite his efforts, there was a report later that the giant fish had expired and washed ashore.

Initially, the California Department of Fish and Game applauded Apothaker’s efforts to save the fish, finding that the actions in hooking the fish were completely “incidental”. However, after many animal rights activists complained about the incident, it was brought to the attention of the Orange County District Attorney’s Office. After several months, the Orange County District Attorney’s Office decided to file a case against Apothaker.

Apothaker is being represented by Christopher J. McCann, a Criminal Defense Lawyer in Long Beach who is working pro bono to protect Apothaker’s rights. After almost a year, Jon Apothaker’s case is presently scheduled to go to trial on March 14, 2011, at the Harbor Justice Center in Newport Beach, California.

What people may not realize is how easy it is to accidentally catch a protected species while fishing. Long Beach Criminal Defense Attorney Christopher McCann explained, “Many people don’t realize that the catching of a protected species happens quite often in Southern California. Fortunately, my client took the appropriate steps toward saving the black sea bass, which many people don’t do. Hopefully this case will raise awareness about the protected status of the black sea bass.”

Apothaker has started a website to do just that and turn a negative into a positive by informing the public about the plight of the black sea bass at his website, Save The Sea Bass.