Former William Morris VP Jay Jacobs has taken over as Manager for singer and entertainer Tracey Singer to lead efforts in pursuing opportunities throughout the entertainment industry. 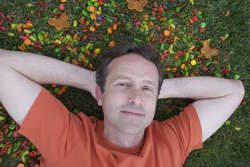 “Most people know of Tracey as a terrific musician and composer, but in my opinion, Tracey’s rare kind of across-the-board creativity and talent excites me most and opens things up for us as we explore opportunities in several areas in entertainment."

San Diego-based entertainer Tracey Singer is pleased to announce he has engaged industry icon Jay Jacobs as his manager. As the former head of music and vice president of the William Morris Agency as well as former vice president of International Creative Management, Jacobs has represented legendary and diverse talent, including The Beach Boys, Simon and Garfunkel, Al Jarreau, Diana Ross, Crosby, Stills and Nash and Michael Feinstein.

Tracey Singer commented on the arrangement, “When Jay proposed the idea of becoming my manager, of course I immediately agreed. He has worked with and accelerated the careers of so many absolute giants in entertainment, and I am thrilled and honored that he will now be working with me. When I mention Jay’s name to my associates, it always elicits the same reaction; a combination of awe and affection for him. Jay is a great guy who can provide expert guidance for me in my career.”

Jay Jacobs added, “Most people know of Tracey as a terrific musician and composer, but in my opinion, Tracey’s rare kind of across-the-board creativity and talent excites me most and opens things up for us as we explore opportunities in several areas in the entertainment business. We’re already expanding Tracey’s reach in mediums beyond his current successful projects.”

One of the most versatile and multi-talented musicians to appear on today’s children’s music scene with his multi-award winning CD, Sweets ‘n’ Treats (MR. CAL Records), Tracey Singer is also an accomplished composer with a catalog of published choral music. To add to these impressive artistic accomplishments, Singer holds a Master’s Degree in Business Administration/Marketing, which he parlayed into an early career in the corporate world with a Fortune 100 company. In spite of this formidable resume, Singer knows that his most important role is that of work-at-home dad to his four young children who were his influence to write and record the children’s CD. Sweets ‘n’ Treats is available online at http://www.traceysinger.com, cdbaby.com, amazon.com, and iTunes.