Since the FDA Advisory Panel Hearings were held in December, public awareness of the safety concerns of the dental mercury filling has resulted in increased nationwide requests for removal of silver mercury fillings. Dr. James Rota, a biological dentist, will conduct a seminar for the general dentist regarding safe mercury removal, protection of the patient, dental assistant, dentist, and the environment, on February 26 in Los Angeles. 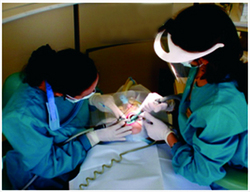 Environmental laws, consumer demand, and health practices are changing. It is time for dentists to acknowledge these changes and the possibility of their own levels of toxicity.

As if going to the dentist isn’t daunting enough, now patients are learning that the dental amalgam filling may be harmful to themselves and the environment. But there may be more potential problems in removing the silver filling. Dr. James Rota teaches general dentists how to safely remove mercury fillings, while reducing risk to the patient, dental team, and the environment.

“This is the first seminar of its kind available to the general dentist. The extensive scope of the seminar includes current recommended protocols for safe mercury removal, environmental concerns of the use of mercury in dentistry, the legal and regulatory aspect of mercury in the dental office, and detoxification methods for the patient and dentist,” as described by Dr. Rota.

The “Mercury Safe Dentistry” seminar will be offered to general dentists on February 26, 2011, at 8:00 am at the Renaissance Los Angeles Airport Hotel. Dr. James Rota, a former UCLA Assistant Professor, and Dr. Hans Gruenn, MD, an internationally known toxicity treatment expert, will conduct the eight-hour class, providing eight continuing education credits for attending dentists and staff. More information about the seminar may be found by visiting http://www.BeMercurySafe.com.

Due to pressure from consumer groups, the FDA was compelled to revisit the issue of the safety of the dental mercury filling. Most people are not aware their amalgam fillings may contain as much mercury as a thermometer. Mercury is a known neurotoxin and is the second most toxic metal on earth. It vaporizes easily at room temperature. Inhaled mercury vapor is readily absorbed into the bloodstream.

"Mercury greatly undermines the immune system's ability to defend itself against the daily assaults of bacteria, viruses, and toxins, making us more susceptible to diseases and breakdown of the body," says Dr. James Rota. “When a patient has symptoms, such as a stomach ache, fatigue, or headache, they don’t go to the dentist, they go to their physician.”

Dr. Rota promotes the team approach in helping patients detoxify their body by working closely with supportive health practitioners, including integrative medical doctors, that are able to evaluate and address the individual needs of patients with varying degrees of toxicity and their ability to handle the process of detoxification.

Casual removal of mercury can do more harm than good. The heat of the dentist drill will further vaporize the mercury in the filling, so protocols need to be followed to safely remove dental amalgam. At the FDA hearing, several dental patients testified to severe debilitating symptoms after unprotected amalgam filling removal.

Denise Knight described her personal story of being told by her general dentist that protection during amalgam removal was “a bunch of baloney.” Soon after the unprotected removal of her mercury fillings, she suffered numerous symptoms, including a compromised immune system, collapsed colon, heart valve problems, severe allergies, chronic fatigue, and many more. She was tested for heavy metal toxicity. The acceptable or normal range is under 3 micrograms. Her mercury level results were 660 micrograms. After several years of treatments for heavy metal detoxification, Denise now enjoys improved health and educates consumers about the danger of unprotected amalgam removal.

A study published in the Journal of Orthomolecular Medicine entitled, “Symptoms Before and After Proper Amalgam Removal in Relation to Serum-Globulin Reaction to Metals,” indicated that “proper amalgam removal and, in some cases, removal of all the other metals and replacement with biocompatible composites can eliminate or reduce 80% of the classic symptoms of chronic mercury poisoning.”

The EPA has designated mercury as its Number One hazardous waste. Dental offices are a “significant contributor” to mercury in waste water. Amalgam is made up of approximately 40% to 50% mercury, 25% silver, and a 25% to 35% mixture of copper, zinc, and tin. Once mercury is discharged to the environment, it converts to methylmercury, a very toxic form, and bio-accumulates in fish.

“Environmental laws, consumer demand, and health practices are changing. It is time for dentists to acknowledge these changes and the possibility of their own levels of toxicity,” says Dr. Rota. In October 2010, the City of Costa Mesa took an official position in support of a ban of dental amalgam fillings. Senator Diane Watson has encouraged all California cities to follow Costa Mesa’s lead.

Dr. Rota further explains, “I have personally experienced industrial levels of mercury in my body and at one time became physically and emotionally disabled. An extensive detoxification program restored my health. It is my mission to help dentists and patients avoid the difficult road I traveled.”

Dentists who are interested in the “Mercury Safe Dentistry” seminar may visit http://www.BeMercurySafe.com or call 888-708-2525 for more details about enrollment and an early registration discount.

For the public, Dr. Rota holds monthly seminars about the risks of dental amalgams, the connection of the mouth to the rest of the body, and detoxification. The next seminar is scheduled for Wednesday, January 19, 2011, at 6:30 pm in his Westwood office, located at 924 Westwood Blvd., Suite 505, Los Angeles. For more information about holistic or biological dentistry or details about upcoming seminars, contact Dori Rota or visit http://www.DrRota.com.

About Dr. James Rota:
Dr. Rota offers biological dentistry services and education. During his forty years in dentistry, Dr. Rota has been a UCLA Assistant Professor and a pioneer in Dental Ergonomics, developing many work simplification standards now practiced by dentists as common procedure, including Four-Handed Dentistry. He also helped develop the protocols for safe mercury removal from the mouth, which are commonplace in Biological Dentistry today.

Behind the Smile Seminar: Open to the Public