TheFedoraStore.com and Stetson Brings Back a Hat from the 1940s 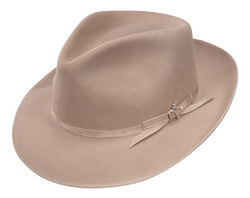 Stetson Hats re-introduces the Stetson Stratoliner Hat, originally introduced nearly 70 years ago. After months of coordination between HatsAmerica (owners of www.TheFedoraStore.com) and RHE Hatco, Inc. of Garland, Texas (Hatco), this famous hat has been

The Stetson Stratoliner hat has a classic style. A wider brim than your popular urban fedora, and a lighter, quality fur felt construction. Fueled with exuberance for the age of air travel, the Stetson Stratoliner drew its name from the sleek, silvery four-engine Boeing 307 Stratoliner passenger planes that debuted in 1940. This plane became Howard Hughes' private luxury airliner during his association with TWA, the airline that flew the Stratoliners.

Duane Dewsbury, owner of headwear retail website http://www.TheFedoraStore.com, said he is really excited that the folks at Stetson have agreed to bring the hat back. "In July 2010, I spoke with Gary Rosenthal at Stetson and suggested they bring back this style," said Dewsbury.

"I wouldn't mind re-activating the style Stratoliner because we are featuring "retro" or older style hats. For example we brought back the Whippet style," said Rosenthal. "We are doing well with it, both in felt and straw."

"I discovered that there was a lot of interest in this style, and there are many collectors of this vintage hat," said Dewsbury. He added that there was a quickly decreasing availability of the old Stratoliner Hats, and those still available online on auction sites were quickly increasing in value. "I even found an online discussion group called the 'Stratoliner Society' at http://www.TheFedoraLounge.com," he said.

Because of the strong following and interest in this vintage Stetson hat, Dewsbury worked with the management at Stetson to bring the hat back. He said he is pleased to be the first, after nearly half a century, to offer the Stetson Stratoliner for retail sale on his website.

The Stetson Stratoliner is made by RHE Hatco, Inc. of Garland, Texas (Hatco). Under its Stetson license agreement, Hatco continues to have the exclusive right to manufacture and distribute felt and straw hats, including Western and dress hats, in the US, Canada, and Mexico.