In a distressed economy, what could be more motivational than “rags to riches stories?” Why Didn't I Think of That? tells the tales of everyday people whose innovative ideas have made them outrageously successful entrepreneurs. 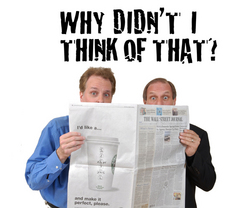 Why Didn't I Think of That? LLC Co-Founders Greg Anastos (right) and Bob Smith (left)

In a distressed economy, what could be more motivational than “rags to riches stories?” That’s why marketing veterans Greg Anastos and Bob Smith are launching Why Didn’t I Think of That? (R), a venture that celebrates the entrepreneurial spirit with inspirational stories.

“We’re telling success stories of America’s new wave of entrepreneurs,” says Anastos, “everyday-people who’ve built businesses around unusual products or services.” Their stories are told through a radio feature, a blog, and a website where visitors can hear more than 80 2-minute audio vignettes. Anastos and Smith want to syndicate these nationally as a radio feature that tells the story of a new entrepreneur, every day.

“We focus on 'the moment of inspiration,'" explains Smith. “Instead of 'deconstructing' a business using an MBA approach, we concentrate on where they got the idea in the first place – that’s what would-be entrepreneurs want to know.”

Anastos conceived “Why Didn’t I Think of That?” while stuck in traffic on Chicago’s Edens Expressway. “Over the radio, I heard a story about a fun, new company with an innovative product. I slapped my forehead and said, ‘Now, why didn’t I think of that?’" Inspired, he and Smith trademarked the question as a brand name for web and entertainment use.

To help other would-be entrepreneurs, the two developed 12 axioms to identify where the best business ideas originate. They also explore stories behind famous established brands, like the accident-prone wife who inspired the world’s most popular first aid product.

“We want to help anyone who’s fallen on hard times to dig out,” says Anastos. To that end, their website also includes "Inspirational Quotes," plus "Helpful Links" for planning tools, copyrights, trademarks, the Small Business Administration and SCORE business mentoring. While radio and the web are their current focus, Why Didn’t I Think of That? also plans to deliver stories via YouTube, commercial TV, podcasts and books.

Why Didn’t I Think of That? LLC is a limited liability entertainment services company, headquartered in Libertyville, IL.

Sample Story: Batter BlasterPre-mixed pancake and waffle batter in an aerosol can? Just shake the can, and spray as many pancakes as you want onto a hot griddle. Batter Blaster is an FDA certified organic product. Sold in 10,000 stores across the country. Sales: $9 Million.