As the economy bounces back in 2011, there are a number of indications that hiring will increase among growing companies, especially when it comes to contract work and freelance opportunities. 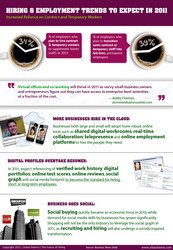 We have seen a rise in social media positions by over 50 percent in the last six months, and this number is continuing to climb.

Employers continue to rely on freelance talent for their marketing efforts, especially in areas such as Search Engine Optimization and Social Media Marketing. “Our data indicates the same trend”, says Urban Inters co-founder Cari Sommer, “We have seen a rise in social media positions by over 50 percent in the last six months, and this number is continuing to climb.”

In 2010, 86% of positions posted on Urban Interns.com were for less than 20 hours a week of work, supporting the trend of a shift towards freelance and part-time employment. Furthermore, 82% of those jobs were designated as “virtual”, which is due to an overwhelmingly large demand in the digital media space. Employers are increasingly seeking candidates with an understanding of how to utilize new technologies, particularly for tasks such as online marketing and public relations.

Employers can browse the Urban Interns database to find an intern or freelancer, or register their company to post job opportunities.

About Urban Interns:
Urban Interns is a national marketplace that connects growing companies with people seeking part time jobs, internships and freelance positions. Urban Interns was named one of America’s Most Promising Startups by BusinessWeek.com and has been featured in Tech Crunch, the Wall Street Journal, Crain’s NY, Fox Business News, and Reuters.