Rare Domain Name AY.com Put up For Auction With $79,999 Minimum Bid & No Reserve

Domain Name AY.com is currently being auctioned off with a minimum bid of $79,999, and no reserve. There are only 676 2-letter .com domain names that exist. Recent sales of other 2-letter .com domains include that of FB.com which retrieved over $8 million. 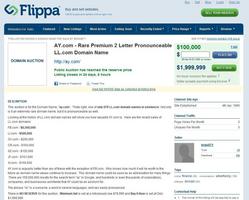 It is virtually impossible to appraise a domain name this rare. If a large company, or wealthy individual were to set their sites on AY.com, it could be worth in the millions.

Domain names have been considered an excellent investment since the internet began using them to point to websites back in the early 1980s. However, when it comes to buying and selling domain names, it is extremely rare to see 2 letter .com domains become available. This is simply because less than 700 of these combinations exist.

AY.com is up for auction with a minimum bid of $79,999. The current high bid stands at a mere $100,000, and the current owner has elected to auction this extremely rare domain name off with 'No Reserve' bid. This means that the high bidder will automatically win the auction, no matter what the price.

"I'm taking a chance here. I certainly believe that it is worth more than the current bid of $100,000, but I am willing to sell it for whatever it retrieves," explained Eddie Krassenstein, the current owner of the AY.com domain name.

History shows that the value of this rare domain name could be very high, but it's hard to guess how high it could actually go? Recently Facebook purchased the domain name FB.com for over $8 million, while YP.com sold for close to $4 million. Will AY.com fetch that much in auction? Probably not, but the sky is certainly the limit.

"It is virtually impossible to appraise a domain name this rare," explained long time domain name appraiser Bill Huntington. "If a large company, or wealthy individual were to set their sites on AY.com, it could be worth in the millions. It really all depends on who becomes interested."

AY.com was registered in April of 1996, and has changed hands at least one time according to Eddie Krassenstein. He and a partner had purchased it a while back when the previous owner was in dire need of quick cash.

"I looked at it as an investment," said Krassenstein. "I decided to put money into purchasing the domain name rather than taking my chances with the stock market."

The "Buy it Now" price on the auction is set at $1,999,999. This is the price that someone can pay to end the auction prior to its February 18th end date. The auction is currently available to the public at: https://flippa.com/auctions/120091/AY-com---Rare-Premium-2-Letter-Pronounceable-LL-com-Domain-Name