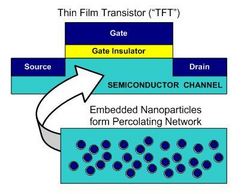 We can offer a combined technology solution with a tool that facilitates the laying down of organic semiconductor inks with embedded particles ...

Versatilis LLC, a high technology development Company based here, announced today it has developed a method for significantly increasing the performance of the organic semiconducting inks used for printing electronic circuits. Working with research partner Lehigh University under a Small Business Technology Transfer (STTR) grant from the Office of Naval Research, Versatilis showed polymer transistors with 5-fold improvement over what could be otherwise achieved in such devices without incorporating its technology.

Electronic devices made of organic or amorphous inorganic semiconductor materials, especially those made of “printable” semiconductor inks, have poor performance when compared to conventional silicon electronics. This is largely due to the very low intrinsic ability of such semiconductors to transport electrical charges, a problem that severely limits, for example, the appeal of printed electronics for higher end applications. Versatilis’ technology involves mixing conductive nano- or micro-particles into the semiconductor host material to form so-called percolating networks of dispersed particles. Such networks of embedded conductive particles enable electrical charges to take “shortcuts” effectively shortening their travel path, and dramatically improving device performance such as switching speed and other parameters.

The effect had been previously demonstrated using carbon nanotubes to form percolating networks in a so-called “pick-up stick” transistor, but carbon nanotubes have presented a variety of challenges, all of which are circumvented by Versatilis’ technique using particles.

Versatilis demonstrated a number of thin film transistors made with such embedded conductive particle based percolating networks and has been awarded the first broad patent (US 7,879,678) of several still pending. “We are delighted to introduce this technology to the industry, and are discussing a number of exciting follow-on projects,” said Ajay Jain, Versatilis CTO and the principal inventor of the technology, adding that existing printing technologies can be used, for example in a roll to roll manufacturing scheme since feature sizes can be larger for equivalent device performance.

The technique can be used at high production rates in such a manner, as well as on wafers in batch mode. As a complement to this technology, Versatilis had also acquired in November last year the assets of Nanometrix, Inc., which included a novel technology for depositing ultra-thin, nano-scale coatings as well as monolayers of particles. “We can offer a combined technology solution with a tool that facilitates the laying down of organic semiconductor inks with embedded particles as well as semiconducting particles including so-called hybrid inks at high rates,” said George Powch, Versatilis CEO.

Versatilis LLC is a research and development, intellectual property oriented venture focused on developing high growth businesses in the area of flexible electronics. The Company levers advanced materials and manufacturing process technology which it has developed or acquired for unique competitive advantage in applications ranging from flexible displays to flexible, conformal solar cells, from flexible solid state lighting panels to selected applications in the aerospace defense industries.

The Company was founded in 2004 in Shelburne, VT by Ajay Jain, its Chief Technology Officer, and George Powch, its President and CEO. It works with associates and partners around the country and with leading research universities. Versatilis has won numerous Small Business Innovation Research (SBIR) Awards from agencies of the U.S Government, including several from the Defense Advanced Research Projects Agency (DARPA), Army Research Laboratories, and from the Department of Energy (DOE). Versatilis is a 2006 winner of the National Roland Tibbetts Award for SBIR Excellence, awarded by the Small Business Technology Council. The Company is funded by a number of private investors who specialize in leading edge technology ventures.