The Royal appointment continues to mark the historic Royal jeweler, who famously cut the 3,105 carat Cullinan diamond which is featured through England's Crown Jewels collection, as the only jewelry company in the world to be given such title. Today, Royal Asscher has become synonymous with special occasions from engagements to red carpets; from royals to celebrities. 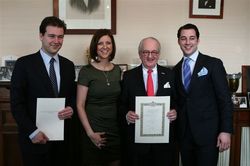 Today marks the celebration of knowing the difference between an Asscher Cut and a Royal Asscher Cut.

Royal Asscher Diamond Company, the historic fine jewelry house to most of the world’s royalty including Queen Juliana of the Netherlands and Queen Elizabeth II, and the late Princess Diana, is proud to announce that they have, for the second time, been awarded the “Royal” title for the next 25 years in acknowledgment for their leading role in the diamond industry.

Royal Asscher, which is known for having created their own signature patented cut “Royal Asscher cut” in 1902, which is owned by the world's most stylish women such as Julia Roberts and Gwenyth Paltrow, as well as being at the forefront of ethical diamond sourcing, still continues the tradition today of innovation and integrity with a heavy involvement in the Diamond Empowerment Fund (DEF). Royal Asscher’s involvement with the DEF aims to establish education, healthcare, and self-sufficiency programs in Africa's diamond-producing areas.

The title was granted by the Deputy Mayor of Amsterdam, Lodewijk Asscher, at the Royal Asscher Head Quarters in Amsterdam on the 16th of February 2011. The Royal title follows a diligent process initially starting with the Mayor, and ultimately conferred by her Majesty the Queen.

Lita Asscher, President of Royal Asscher of America, says: “today marks the celebration of knowing the difference between an Asscher Cut and a Royal Asscher Cut. I am so grateful to my father, my uncle, my grandfather and all generations for passing on their passion and love for diamonds. It is my privilege and mission to lead this company together with my brother to the 7th generation.”

In 1980, upon Louis Asscher ‘s retirement, the reigning Queen Juliana had offered him a choice: knighthood or lasting legacy for his company. Louis Asscher's choice to create Royal Asscher still graces the company’s ethos today, defining the core values: quality, integrity and craftsmanship.

Royal Asscher has exclusive clientele of international royalty such as Japan’s Emperor Hirohito and Queen Juliana and Prince Berhard of the Netherlands. Royal Asscher’s signature diamond cut is a part of Queen Elizabeth II of Great Britain’s Royal sceptre and crown which she wears for the opening of Parliament every year as well as other royal heirlooms. For royal weddings Queen Elizabeth II’s Crown Jewels are traditionally borrowed by the bride-to-be on the royal wedding day. With the marriage of Kate Middleton and Prince William in April, we await her selection from the Crown Jewels and whether it will include Royal Asscher diamonds. Regardless, Royal Asscher Diamonds will always be an integral part of traditional events in all Royal houses around the world.

In honor of this acknowledgment from the Queen of Netherlands Royal Asscher will release a special edition Stars of Africa ring with orange diamonds on April 30th, 2011, the former Queen’s birthday. The Orange Diamonds will represent the national color of the Netherlands and a tribute to the Royal House of Oranje -Nassau.

Founded in 1854, Royal Asscher Diamond Company is run by The Asscher Family. The Asscher Family dynasty to this day, continues to have an influence on the diamond industry. Joseph Asscher, at the request of King Edward VII, cut the largest diamond ever found, the famous 3,105-carat Cullinan diamond. Royal Asscher has also made its mark by refusing to work with conflict diamonds that originate from war torn countries that are unethically sourced and sold to fund warfare and civil destruction. Royal Asscher only sources diamonds from nations that are fully compliant with the Kimberly Process, an international diamond industry initiative to stop the flow of conflict diamonds. One of the company’s founding fathers, Edward Asscher was one of the forefathers of this initiative, Royal Asscher requires that all of its diamonds are labeled by the government at the origination point and securely sealed during transportation.

Royal Asscher created their own signature patented cut in 1902, which has 74 facets, that’s 16 more than the traditional cut diamond. The innovation and skill level of Royal Asscher has been passed down from generation to generation. Now on its 4th generation owners the companies still upholds their reputation for excellence.

In 2008 Royal Asscher created the Star of Africa line which guarantees a minimum donation of $50,000 to go to the Diamond Empowerment Fund® (D.E.F.) a non-profit international organization founded by Russell Simmons. Donations will sponsor students from Sierra Leone who attend the African Leadership Academy (ALA), founded on the belief that ethical leadership is the key to transforming Africa. Royal Asscher’s revenue from the sale of its Stars of Africa line of fine jewelry and aims to establish education, healthcare, and self-sufficiency programs in Africa's diamond-producing areas.

Lita Asscher, the president of Royal Asscher of America, noted that "Our partnership with the Diamond Empowerment Fund will allow us to enrich the African Leadership Academy by providing students with the opportunity to gain an education in areas of leadership and entrepreneurship that will prepare and propel each exceptional mind to support their continent. Giving students the tools to become ethical leaders, Star of Africa will help D.E.F. and the ALA to develop political stability and economic development in diamond-producing countries."

The Stars of Africa collection represents one of the greatest innovations in the jewelry industry- floating diamonds. Diamonds which are encased in a fluid filled sapphire dome move around freely which creates an effect that is utterly mesmerizing. Stars of Africa are available in white, yellow and rose gold. Royal Asscher’s beautiful modern twist on traditional diamond design is helping rebuild Africa, which makes each piece have an underlying beauty as well. For more information on the Stars of Africa collection please visit: http://www.royalasscher.com/starsofafrica/

Kate Bosworth wears Stars of Africa collection by Royal Asscher to the 2010 Vanity Fair Oscars PartyRoyal Asscher has become synonymous with special occasions from engagements to red carpets; from royal visitors to celebrities.