In the past 15 years, the number of U.S. rare coins valued at $1 million or more has zoomed from one to 235, according to a group of numismatic market experts. Professional Coin Grading Service (PCGS) reports that in the past year some members of the "PCGS Million Dollar Coin Club" jumped in value as much as 50 percent. 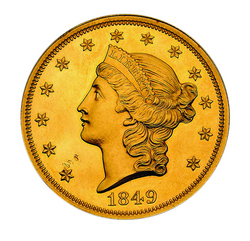 "The increasing value of ultra-rare coins shows the strength of the market for truly rare, historic U.S. coins, and is also helped more than a little by the strength of the gold and silver bullion markets and the general weakness of the U.S. dollar."

Some of the world's most valuable rare coins have increased in value by an estimated 25 to 50 percent the past year, according to rare coin market experts who compiled their second annual reference guide of multi-million dollar numismatic treasures: the 2011 Professional Coin Grading Service (PCGS) Million Dollar Coin Club (http://www.PCGS.com/million-dollar-coin-club/).

"The increasing value of ultra-rare coins shows the strength of the market for truly rare, historic U.S. coins, and is also helped more than a little by the strength of the gold and silver bullion markets and the general weakness of the U.S. dollar," said David Hall, President of Collectors Universe, Inc. (NASDAQ: CLCT) of Santa Ana, California.

The most valuable United States coin listed is the Smithsonian's 1849-dated "Double Eagle" $20 denomination gold piece. This unique coin was struck by the United States Mint in Philadelphia during the early days of the California Gold Rush, and it jumped from an estimated $15 million last year to $20 million now.

"We certainly had a lot of fun putting this list together for the benefit and enjoyment of collectors and dealers," said Hall.

Based on their professional opinions and recent sales, here are the experts' top ten most valuable coins struck by the United States Mint, their grades (state of preservation on a 1 to 70 scale) and their year-ago values if they changed:

1849 $20 Liberty (estimated grade Proof 64) -- $20,000,000 (last year listed at $15,000,000). The first $20 gold piece struck at the United States Mint is part of the National Numismatic Collection at the Smithsonian's National Museum of American History. It will be exhibited in Chicago in August at the World's Fair of Money (http://www.WorldsFairofMoney.com) sponsored by the American Numismatic Association.

1907 Double Thick Extremely High Relief Saint-Gaudens $20 (two coins, both estimated grade Proof 69) -- $8,500,000 each. Arguably the most beautiful coin ever made, the Double Eagle designed by renowned sculptor, Augustus Saint-Gaudens was struck in several variations including two examples that are smaller in diameter and with double thickness. Both are in the Smithsonian.

Since 1986, PCGS experts have authenticated, graded and certified more than 21 million coins from around the world with a declared value of over $20 billion. For additional information, visit http://www.PCGS.com or call PCGS Customer Service at (800) 447-8848. PCGS is a division of Collectors Universe, Inc. (NASDAQ: CLCT).

Once owned by the legendary King of Siam, this 1804-dated U.S. silver dollar is valued at $6,500,000 in the 2011 PCGS Million Dollar Coin Club. (Photo credit: Rare Coin Wholesalers.)Valued at $6,500,000 in the 2011 Professional Coin Grading Service Million Dollar Coin Club list, this 1804-dated U.S. silver dollar is part of a set of coins originally given to the King of Siam in 1836 as a diplomatic gift on behalf of President Andrew Jackson. (Photo credit: Rare Coin Wholesalers.)