STATISTICA Data Miner and STATISTICA Text Miner software received top average ratings including the highest rating as the primary predictive analytics tools and also received the highest user satisfaction, and “expectation of continued use” ratings of any competing software products. 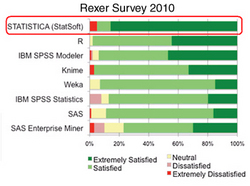 Data Miners were highly satisfied with STATISTICA because of its:

Scoring new data with a predictive analytics model was also addressed in the survey. STATISTICA users have many robust and diverse options. For example, data can be scored inside of an Oracle, SQL Server, or Teradata database. Data can also be scored within STATISTICA Data Miner or in STATISTICA Enterprise.

The combination of STATISTICA Enterprise and STATISTICA Data Miner is a very powerful and flexible solution. Analyses can be defined once and used by many people. Security is "roles based", so that the right people get the reports.

Karl Rexer has presented these survey results at the Predictive Analytics World in Washington, DC.

About StatSoft® Inc.
StatSoft, Inc., founded in 1984, is one of the largest producers of enterprise and desktop software for Data Analysis, Data Mining, Quality Control/Six Sigma, and Web/Server-based Analytics. Its products are used worldwide at most major universities, corporations, and government agencies and are supported with training and consulting services by a worldwide network of StatSoft offices in 24 countries on all continents.